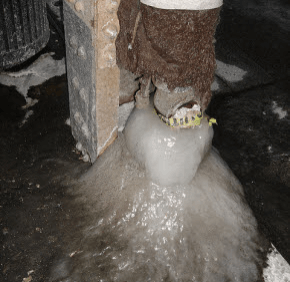 By Maria Wiering and Elizabeth Lowe
Since January, 23 parishes and schools have filed property claims with the archdiocese due to weather-related losses. The number is up significantly from the three previous years. In 2013, nine weather-related losses were reported in the same time period; in 2012, five; and in 2011, nine.
The number of claims this year is lower than in 2010, when the archdiocese was pummeled by back-to-back snowstorms which ranked in Baltimore’s top 10, said Tom Alban, the archdiocese’s director of risk management. (See article on the impact of the 2010 blizzard)
Alban has been working with parishes and schools to mitigate immediate damage and assess overall damage.
All of the claims involved burst pipes and subsequent flooding, and each location is in “varying stages of reconstruction,” Alban reported.
“In large part, most of them were not preventable,” he said of the instances of damage.
Of the claimants, St. Joseph in Fullerton sustained the worst winter-related destruction, Alban said. Its daily Mass chapel endured water damage and daily Masses are currently being held in the main church.
In Oakland, January brought several days where the low fell below zero, including a 15-below day on Jan. 7. At St. Peter the Apostle, the archdiocese’s westernmost parish, a frozen water pump burst that day, flooding the parish hall. The next day, nine radiators burst and flooded the parish-owned house next door, where two Sisters of Mercy run an ecumenical charitable outreach, House of Hope.
“It was quite a mess,” said Donna Cook, St. Peter’s office manager.
At the School of Cathedral of Mary Our Queen in Homeland, a burst pipe caused water damage to the gymnasium floor and the ceiling of the cafeteria below it Feb. 6. The school closed the gym for seven days, said Hugh Andes, the Cathedral’s facilities manager.
At Our Lady of the Fields in Millersville, separate instances of bursting pipes in January caused flooding in the rectory apartment’s bathroom and parish office, said Vince Grauso, the parish’s business manager.
Our Lady of Pompei in Highlandtown suffered extensive water damage Jan. 26 – a pipe burst in the attic, causing a leak that ran down four floors, affecting the old convent and church. Heavy winds also damaged the slate roof.
“It’s all cleaned up,” Pat Picarello, Our Lady of Pompei’s office manager, said of the water. “The remodeling all needs to be done yet. No. 1, the roof should be tended to first, so we can repair the rest without worrying about more damage.”
The archdiocese will pay for the claim losses from its self-insurance program. Each parish will pay either a $750 or $1,500 deductible, based on whether they use a pre-qualified contractor for repairs.

Deep freezes have also taken a toll on parish budgets. St. Joseph in Hagerstown spent 95 percent of its facilities budget, which includes utilities and snow removal, by the end of January. Its new fiscal year begins July 1.

Angie Viar, St. Joseph’s office manager, suspects giving has also been down due to Masses parishioners have missed due to cold weather.
“It’s going to be a struggle,” Viar said. “We’re attempting to cover our budget. It definitely has impacted the parish.”
St. Joseph also had damage due to burst water pipes.
The cold and snow hasn’t affected attendance at Our Lady of Perpetual Help in Edgewater, Sister of Christian Community Kathleen Collins, the parish’s pastoral associate. She did expect utility costs to be higher than usual. Removal of two or more inches of snow costs the parish $1,400 each time.
Not all parishes with losses are included among the archdiocesan claimants. Mount Calvary Church, an Anglican-use parish in Baltimore, reported frozen pipes bursting Jan. 7, when temperatures dropped to 4 degrees.
The water damaged the fuse box and church’s main boiler, and caused “a minor flood” in attached apartment of its parish sacristan. It also breached an exterior masonry wall.
“Alarming as the damage was – and as cold as the church was for a few days – it could have been far worse,” Mount Calvary reported in its February newsletter. “The main boiler dates back to the Coolidge Administration, and thus very near the end of its useful life. The boiler is ‘performing like a champ,’ according to sexton Mike Byrd, but it left some moments of worry before it was clear that it could be re-started.”
A century ago, Mount Calvary lost its steeple in a blizzard.
Jan. 7 has been Baltimore City’s coldest day to date in 2014, but Jan. 22 came close, with a low of 6 degrees.
On the schools front
Dr. Barbara McGraw Edmondson , superintendent of archdiocesan Catholic schools, said the archdiocese has a minimum of three snow days built into the calendar, in addition to two make-up days at the end of the school year. She anticipates most schools will use those days and close June 13, rather than June 11.
In times of a State of Emergency, which Maryland Gov. Martin J. O’Malley most recently declared Feb. 13 when a winter storm dumped more than two feet of snow in some parts of the archdiocese, those snow days are not required to be made up, Edmondson said.
“There are lots of variables in there,” she said. “We are praying we have seen the end of the snow.”
Also see:
A lesson in humility: New All Saints running coach inspires, motivates
Parish milestones: St. Rose of Lima celebrates 100 years
PrevNext