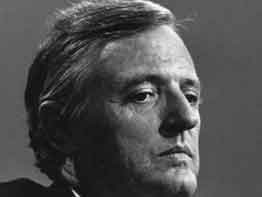 WASHINGTON – William F. Buckley Jr., a Catholic with an extraordinary gift for the spoken and written word who was dubbed the godfather of modern American conservatism, died Feb. 27 at his home in Stamford, Conn. He was 82.

The commentator suffered from diabetes and emphysema, but the exact cause of death was not known. Buckley was found dead at the desk in his study where he reportedly had been writing.

“He died with his boots on, after a lifetime of riding pretty tall in the saddle,” his son, Christopher, was quoted as saying.

Funeral arrangements had not been announced as of Feb. 28.

Buckley may have been best known for his work with the National Review, a conservative political magazine he founded in 1955 and where he served as editor until 1990. He also wrote more than 50 books as diverse as spy novels and a book on sailing. He wrote an account of his Catholic beliefs in the 1997 book “Nearer, My God: An Autobiography of Faith.”

He also was a television host for more than 30 years for the PBS program “Firing Line.”

Buckley was born in New York in 1925, the sixth of 10 children. His father, who made his multimillion-dollar fortune in oil, had his children educated by personal tutors at the Buckley family estate in Sharon, Conn., and Catholic schools in England and France.

Buckley served in the Army from 1944 to 1946, and then attended Yale University, where he studied political science, economics and history. In 1951 he published his first book, “God and Man at Yale: The Superstitions of Academic Freedom,” accusing the university’s faculty of a bias against religion, individualism and capitalism.

In 1961, Buckley was criticized by the editors of America magazine, a national Catholic weekly magazine run by the U.S. Jesuits, over comments he had supposedly made that were critical of Pope John XXIII’s encyclical “Mater et Magistra” (“Mother and Teacher”).

An article critical of the encyclical appeared in the National Review with the quip “Mater, si, magistra, no!” attributed to Buckley. The quip was a pun on an anti-American chant, “Cuba, si, yanqui, no,” in the news at the time.

The comment generated rounds of complaint letters and editorials on the topic along with an opinion piece in The New York Times in which Buckley complained about America magazine’s coverage.

A month after the controversy arose, Buckley wrote a letter to America’s editor in which he stated the comment was a “flippancy pure and simple” that had not come from him, but from a Catholic scholar and journalist who turned out to be Gary Wills, a contributor to the National Review in 1961.

Almost 30 years later, Buckley was again featured in America magazine. Prior to Pope John Paul II’s 1987 visit to the United States, Buckley was one of 10 prominent Catholics asked by the magazine to respond to the question: “If you had five minutes alone with the pope, what would you say?”

In Buckley’s hypothetical address to the pope, he noted that he wished to pass along “apparently trivial complaints,” such as the failure of the Second Vatican Council to increase the “universal appeal of the church.”

He bemoaned the loss of the Latin liturgy as a “shared sense of historical transcendence” and said he had “subjective doubts about some of the doctrinal questions you have elected to stress.”

He also said he believed “the church is never so grand as when it defies the spirit of the age.”

In a 1973 interview with The Evangelist, newspaper of the Diocese of Albany, N.Y., Buckley called the English-language Mass a “catastrophe.”

“It isn’t in the Catholic tradition of the last 500 years,” he said. “Mass was a bilateral not a trilateral experience. It was between us and God through the priest. Now it seeks to be between us, the priest and whoever else is there.”

One of the major problems with the Mass in English, he noted, was the translation, which he described as “enough to make anyone with concern for the language wince.”

“It is a major penance to recite it aloud. I am tempted at times to wear earmuffs in church,” he said.

In the interview, Buckley added that he was proud of the church for its stance against abortion, something he reiterated in his National Review columns.

In a 1997 interview broadcast on the PBS program “The NewsHour With Jim Lehrer,” Buckley was asked if there was one feature of the Catholic Church that kept him a Catholic. In response, he said it was “the centrality of the assumption that the Catholic Church is the church that was founded by Christ.”

When asked how he squared his conservative views with Catholic social teaching, he said, “There’s always a tendency in churches, as far as I can see, to say we’ve got to build one more gymnasium for the homeless. And I think we should build one more gymnasium – don’t get me wrong – but the attempt to suck spiritual energy into activity of that kind, in my judgment, doesn’t really pay off.”

Besides son Christopher, an author and satirist who lives in Washington, Buckley is survived by two brothers, three sisters and two grandchildren.