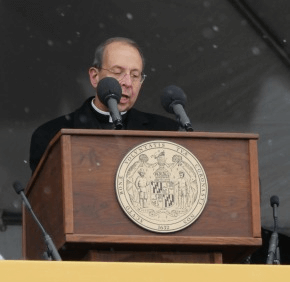 By George P. Matysek Jr. | CR Staff
gmatysek@CatholicReview.org
Some have been diagnosed with cancer or other life-threatening diseases. Others have lost jobs, and are facing financial instability. Still others suffer the pain of broken relationships or the death of loved ones.
Those are just a few examples of the many different kinds of situations that prompt prayer requests throughout the Archdiocese of Baltimore.
The pleas don’t go unanswered.
Each month, the Catholic Review receives an average of 125 prayer requests from readers who fill out a form in the biweekly newspaper. The requests are taken to the Basilica of the National Shrine of the Assumption of the Blessed Virgin Mary, where they are placed on the altar and remembered on the first Friday of the month at the 12:10 p.m. Mass.
Just a few weeks ago, the archdiocese opened a prayer line on its website that encourages people to forward their prayer intentions. An idea of Pam Zimmer, the outreach already attracts between one and three prayer requests each day. A prayer group at the Catholic Center, made up of approximately 15 members, prays for those who have made the requests, and a team of 150 prayer ministers throughout the archdiocese also answers the calls to prayer. The network is often extended via an electronic prayer chain.
Many parishes have their own ways of receiving prayer requests – whether through telephone hotlines, e-mail or through prayer groups.
Christopher Gunty, associate publisher/editor of the Catholic Review, said asking others to join in prayer is an age-old tradition in the Catholic faith. He noted that even on the cross, the “good thief” implored Jesus to remember him when Christ came into his kingdom – and Jesus assured him the prayer would be answered.
“When we ask others to join us in prayer, we invoke the communion of saints – here and in heaven,” Gunty said. “God already knows what we need, but I believe that by asking others to join in our petition, we show our commitment to lifting up each other in love.”
Pat Nadolny, coordinator of the archdiocesan prayer line, said the archdiocesan website also includes prayer resources and a place to record answered prayer.
“There has been a double portion to the blessing,” she said. “Many of our prayer ministers will write back saying, ‘This request has really touched my heart. I will pray for them throughout the day.’”
Also see:
Catholic Review earns more than two dozen journalism awards
‘We had to do something’: Westminster launches 12-step program after parishioner overdoses
Visit archbalt.org to make a prayer request or fill out the form in the print edition of the Catholic Review.
PrevNext