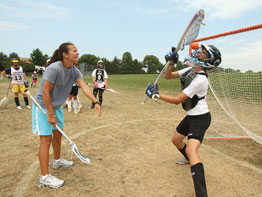 Like many children in her Highlandtown community, Tricia Dabrowski began playing soccer at age 2. The sport became part of who the Our Lady of Pompei parishioner was.

Her parents, Bernie and Joyce, were also up to their elbows in soccer while at the helm of the St. Elizabeth Catholic Youth Organization soccer program for more than 15 years. Soccer became a way of life for the family.

Then the Dabrowskis moved to Timonium, where Tricia Dabrowski attended Dulaney High School. Suddenly, lacrosse became equally as addictive as soccer had been.

After an opponent swung her stick right at her head, Dabrowski decided that was it for field play – she headed to the goalie cage.

Before graduating from high school, Dabrowski was recognized as a High School All-American and was recruited by Loyola College in Maryland to stabilize its program.

Dabrowski has a number of fond memories of her four years as a Greyhound, but none more exhilarating than two trips to the NCAA Division I Final Four, defeating the likes of North Carolina and Duke to get there.

It was in college, and all of those summer camps that she worked, where Dabrowski knew that she wanted to become a lacrosse coach. Dabrowski graduated from Loyola College in 2002 with a degree in communication in advertising, but was quickly hired by The Johns Hopkins University, where she served the last six seasons as assistant women’s lacrosse coach.

“I love working with goalkeepers because they hold the momentum of the game in their hands,” said Dabrowski.

For the hundreds of goalies that Dabrowski works with throughout the year, through camps, clubs and team-level competition, she knows that the physical element is important, but the mental piece, the focus and reaction time, is what’s most critical.

“I tell them, there are 11 other people in front of you,” Dabrowski said. “Great goalkeepers know how to separate their mistakes from those mistakes made in the field.”

On a rainy afternoon in July, Dabrowski was working the “Between the Pipes” goalie camp at McDonogh School, something she has done for the past eight years. With 57 young, eager athletes on hand for the three-day goalie camp, Dabrowski focused on breaking old habits, improving technique and teaching strategy.

“I love working with the kids,” she said.

When Dabrowski isn’t picking up the lacrosse balls around the cage, she’s parked on first or third base at Oriole Park at Camden Yards. Yes, Dabrowski was selected as an Oriole Ball Girl for the 2008 season.

Dabrowski is assigned four games a month, rotates in with seven others who were chosen through an interview process, and provides in-game and pre-game entertainment for the fans.

In addition, Dabrowski will escort folks to the mound for “first pitches,” help in preparations for the national anthem, and work with honorary bat boys and bat girls for the day.

There’s no doubt that Dabrowski’s busy while holding down the fort at either of the corners during the game. In fact, with her glove in hand, Dabrowski made her first catch of the season when a stinging line-drive came her way down the right field line. Dabrowski jumped up, leaned in, and made a beautiful catch that was replayed on the stadium’s big screen for fans to enjoy.

With a great love for sports, Dabrowski reminds anyone and everyone that sports should be fun.