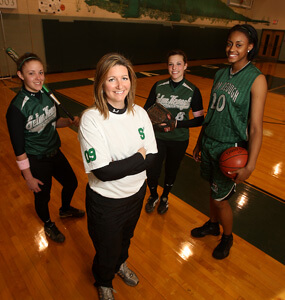 Jackie Boswell is exhibit A in support of the management credo, that if you want a task done, assign it to a worker whose schedule is already full.

Boswell is the athletic director at The Seton Keough High School. She is also the coach of the Gators’ basketball team, which is wrapping up a landmark campaign with an appearance in the four-team regional of a national invitational. That extended season has not detracted from a quick start for the school’s softball team – also coached by Boswell.

How does she do it? Who is on the support staff that allows her to execute that triple-play?

“Besides my husband?” she responds.

Did we mention that Boswell is the mother of three girls?

Kayla, 9, Elana, 7, and Tessa, 4, saw more of their dad, Tony, during a magical March. In the span of nine days, the Seton Keough basketball team added a Bishop Walsh Invitational title to its Interscholastic Athletic Association of Maryland crown, and the softball team upset the area’s No. 1 team.

Sophomore pitcher Megan Hyson has the Gators primed for another IAAM championship, this time in softball. Senior center Asya Bussie, who is headed to West Virginia University, was the prime force in Seton Keough surging past favored St. Frances Academy in basketball and taking a 23-8 record into the ESPN Rise National High School Invitational April 4-5.

After Boswell, no one appreciates that exercise in time management more than Seton Keough senior Carly Read, the Gators’ shooting guard in basketball and second baseman in softball, and junior Rose Young, the only other member of both teams.

They followed Boswell from the softball diamond to the basketball court for a few hectic weeks.

“We’re practicing softball from 3:15 to 5:15, then I’ll go straight to basketball practice at 5:30,” Carly said one afternoon in late March. “I never imagined something like this happening. It’s awesome, what we accomplished in basketball, and this is going to be best softball team we’ve had in my four years here.”

Player and coach are parishioners of St. Agnes in Catonsville, and their bond was apparent during basketball’s Senior Night game against Mercy High, a few weeks after Boswell had handled an unexpected vacancy atop the softball program by filling it herself.

“When she (Read) was acknowledged,” said Mary Ella Marion, the Mercy basketball coach and athletic director, “you could tell how close she was to her coach.

“Jackie wasn’t planning on coaching softball, but she didn’t want that program to drop off. It says a lot about her and how much she cares about the school, that she is able to do all of this juggling. I coach one sport, and I’m an athletic director and a mom. She does all that, and she’s coaching a second sport.”

Boswell has been visible in the area for several decades.

Jackie Cordery (her maiden name) graduated from Archbishop Spalding in 1991, playing both sports there and at Virginia Wesleyan College. She was an assistant coach at her prep alma mater before sharpening her coaching skills in the late 1990s on the AAU circuit under Jim Stromberg, then the Seton Keough boss in basketball.

Stromberg moved on to St. Paul’s School for Girls and Boswell took over at Seton Keough, where she has been steering the Gators’ athletic ship since 2000.

Both the basketball and softball teams, which are assisted by Dave Bowyer and Chuck Snee, respectively, sit atop the DigitalSports rankings for the Baltimore metropolitan area.

Read is a rare veteran on the softball team. Besides her and Bussie, the basketball team will also lose point guard Katelyn Fisher, who appears headed to a Centennial Conference college like Johns Hopkins or McDaniel.

Basketball drew Oak Hill (Va.) Academy in the April 4 semifinals of one of the regionals in the ESPN Rise National tournament. The 6:30 p.m. game will be televised on ESPNU.

“This might be a once in a lifetime experience,” Boswell said.