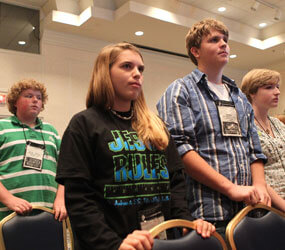 “This isn’t something I can miss,” said the parishioner of Cresaptown’s St. Ambrose and student at Cumberland’s Bishop Walsh School.

To be with Archdiocese of Baltimore teens, Gomer and 40 other Western Maryland high school youths traveled by bus nearly six hours to the other side of the state.

Gomer, 17, said it was worth it, to be a vital part of the three-day BYCC at the Clarion Resort Fontainebleau hotel.

The Western Maryland contingent, which raised $17,000 for the trip, was one of the biggest at BYCC, which had nearly 500 attendees.

“I feel like we have our own thing going on, but we’re a big part of the archdiocese,” said Shandi Sires, 15, a parishioner of Midland’s St. Joseph parish.

It can be difficult for teens from Western Maryland parishes to be connected in the archdiocese, but BYCC showed the lengths the teens were willing to go to display their passion.

“A lot of people like to participate in these things, but we’re really far out of the way, so it makes it difficult to attend,” Snyder said. “We’ve started to get more people from our area involved.”

B.J. Sires, Shandi’s brother, said he “was excited to come out and learn about my faith and have fun with all these kids. It’s awesome.”

Kathleen Broadwater is youth minister to six Western Maryland parishes, from Grantsville to Westernport, and said about 60 young people are involved in thriving middle and high school youth ministry programs.

A youth center at St. Joseph, complete with table tennis and foosball, serves as the hub of activity. Gatherings are open to non-Catholics as well.

She said her teens will come back to BYCC and go to national conferences as they further embrace their role in the Catholic Church.

“They really do make connections when they’re here,” Broadwater said. “They text people they’ve met here, even if face-to-face isn’t always there.”