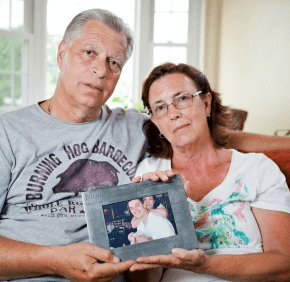 By Maria Wiering
mwiering@CatholicReview.org
WESTMINSTER – Mondays at 6:30 p.m., Monsignor James P. Farmer can be found at St. John Catholic Church’s parish center, welcoming men and women. They’re addicts, there for Maryland’s first – and until recently, only – Heroin Anonymous group, a 12-step recovery meeting specifically for heroin users.
Monsignor Farmer, St. John’s pastor, launched the group last September in response to Carroll County’s rampant heroin use, which took a parishioner’s life in 2012.
A former Baltimore City public defender, Monsignor Farmer has long witnessed the ravages of drug abuse.
“When I became aware of the gravity of the problem, we had to do something to address it,” he said.
Monsignor Farmer’s parish assignments have mirrored the insidious spread of heroin, from city to suburbs to exurbs. Before St. John, he was pastor of St. Thomas Aquinas in Baltimore City’s Hampden neighborhood and St. Ursula in Parkville, just inside the Baltimore Beltway.
He established 12-step recovery meetings at each parish.
In Westminster, some St. John parishioners resisted hosting the group, but Monsignor Farmer stood firm.
“When people who did not want it here realize that one of their kids has a problem, it changes their mind very quickly,” he said.
‘Golden’ to gone
A child’s addiction is something Frank and Ceci Moran know all too well.
“We really don’t know when we lost him,” Ceci said of her youngest son, Kevin, an especially bright, talented athlete with a passion for music and an acute sensitivity to others’ suffering.
Kevin was their “golden child” who once disappeared from their table at a pizza parlor to buy dinner for a man begging outside. He struggled, however, with severe anxiety, even as a kid.
That came to a head when he told his counselor at Delone Catholic High School in McSherrrystown, Pa., he was suicidal. After his hospitalization, Ceci began to homeschool him through a local Christian academy.
When Kevin was 18, the Morans were shocked to discover he was addicted to heroin, and that they had been ignorant of it. Both had worked in law enforcement. Frank, 61, worked for the Maryland State Police Department. Ceci, 63, was a vice and narcotics officer in Howard County before she retired to stay at home after Kevin was born.
In retrospect, she was surprised she missed signs of Kevin’s drug abuse, given her training.
He always wore long sleeves, even in the summer – to hide needle marks, they later learned. Teaspoons, used to melt heroin, were often in short supply. Jewelry and other valuables went missing. Kevin blamed a cleaning service, although he was stealing to pay for drugs. His personality also changed.
Kevin would later tell them that when he was 13, a friend’s older sister shot him up with heroin. He also injured his back at 16, and the doctors prescribed narcotics. The Morans think these events played a role in his addiction.
At age 20, he went to prison for a convenience store robbery. When he got out, he got married and found a decent job. The Morans thought the worst was over.
They’re unsure what triggered his return to drugs, but his use was complicated by narcotics prescribed following back surgery. They were desperate to get him help. Short-term recovery programs hadn’t worked. Houses for addicts were at capacity or rejected their insurance.
They needed something long term, and thought they had found it in on Nov. 13, 2012, when a staffer at a New Jersey program said it would take Kevin the next day.
They went to bed hopeful the morning would bring a new start.
Instead, around 6 a.m., they found their son dead, slumped over a desk in their basement, a tourniquet around his arm. It was 10 days before his 25th birthday.
Kevin left behind a wife and three children. Frank and Ceci adopted two of the children, who were from a prior relationship, and are raising them in Gettysburg, Pa., where they moved for a fresh start after Kevin’s death.
They were St. John parishioners when Kevin died, and Monsignor Farmer and their parish embraced them as they suffered, they said.

When their son Kevin died of a heroin overdose in 2012, Frank and Ceci Moran adopted two of his children, Frank Jr. and Cecilia, to raise as their own.  (Tom McCarthy Jr. | CR Staff)

No family immune
Heroin addiction is nothing new in Carroll County, said Edward J. Coyne, its deputy state’s attorney. The number of fatal overdoses, however, rose last year.
According to the Maryland Opioid Overdose Prevention Plan released in 2013 by the Department of Health and Mental Hygiene, illicit drug-related deaths in the state fell in the past decade, while deaths from pharmaceutical opioids (synthetic opiates) increased. In 2012, deaths from heroin began to rise again.
Coyne said heroin, an opiate, is easy to access within the Baltimore Beltway, but addicts can also buy it in the county, where a tenth of a gram costs $40, four times its Baltimore City price.
For some addicts, the problem begins with alcohol and marijuana abuse, and then prescription drugs such as oxycodone. When obtaining prescriptions becomes too difficult or expensive, some users turn to heroin.
The National Institute on Drug Abuse classifies addiction as a chronic disease affected by heredity, biology and environment.
A St. John parishioner who helped Monsignor Farmer connect with Westminster recovery experts, Coyne was a prosecutor in Carroll’s drug treatment court until last year. Addicts come from all classes, education levels, races and backgrounds; no family is immune, he said.
Monsignor Farmer hopes meeting attendees consider attending Mass.
“We see this as an evangelization opportunity,” he said. “These people have no church; we want to welcome them here to worship with us.”

Westminster is in the center of bucolic Carroll County, but not immune to the perils of drug use.
(Tom McCarthy Jr. | CR Staff)
Second chance
Tim Weber, 49, runs St. John’s recovery group and two sober houses in Westminster. A recovered addict, he started to smoke marijuana and to drink while in high school in Columbia, and first used crystal meth at a college party in Texas.
“That decision cost me 12 years of my life,” he said.
He ended up homeless and heroin-addicted in Baltimore’s Pigtown. He overdosed four times and was stabilized with Narcan; the paramedics said they brought him back from death.
In November 2003 he walked into Howard County General Hospital determined to get sober. He’s never looked back, he said, thanks to 12-step recovery programs and his determination to help others break free from addiction.
The U.S. Drug Enforcement Administration recognized Weber’s contributions May 28 at the opening of “Traveling America: Opening Eyes to the Damage Drugs Cause” at the Maryland Science Center. It included a “Vigil of Lost Promise” for lives taken by heroin.
Among the speakers and awardees were Barbara Allen, who lost her son to heroin in 2003 and now helps others heal from drug-related loss; and Nick Raducha, a college-bound 20-something who got sober with Weber’s help.
In the crowd was 29-year-old Christie Sikorski, a St. John parishioner who attended its grade school. Now she participates in its recovery group.
“We’re all there for one reason – to get better,” she said. “You focus on yourself, your character defects. You get rid of them, and you give them to God.”
Also see:
Baltimore’s newly ordained priests radiate joy
Bishop Rozanski’s parents nurtured his faith
PrevNext