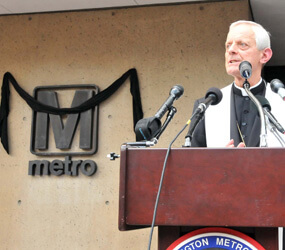 WASHINGTON – One day after the deadliest accident in the history of Washington’s Metro subway system, Archbishop Donald W. Wuerl gathered with Metro employees to pray for those who died or were injured in the incident.

“Confident that God always remembers the good we have done and God is good and gracious, let us remember those who have died … (and) those who were injured both physically or emotionally,” Archbishop Wuerl prayed June 23. “Let us also remember and place before God in prayer the first responders and emergency personnel who came quickly to the aid of the injured and dying.”

The archbishop led the prayer service in front of Metro headquarters. Hundreds of Metro employees left their desks to attend the brief but emotional service.

The service was held in the plaza outside the building, in front of a Metro system logo that was draped in black crepe as a symbol of mourning.

“In this time of testing and pain for so many of our community, guide us with your gentle compassion and unfailing help,” Archbishop Wuerl prayed.

Nine people – two men and seven women – were killed June 22 when two subway trains collided between two stations. Among the dead was 42-year-old Jeanice McMillan, operator of the train that struck another train from behind.

The accident occurred just after 5 p.m., during the busy rush-hour commute. According to published reports, the two trains were on the same track when the train operated by McMillan struck another train that was standing still while awaiting clearance to enter the next station.

The National Transportation Safety Board was investigating the cause of the crash.

Close to 80 people were injured in the incident. Five of those injured were treated at nearby Providence Hospital, which is sponsored by the Daughters of Charity of St. Vincent de Paul.

Hospital spokeswoman Stephanie Hertzog said four accident victims were brought into the hospital by ambulance. A fifth person came in later by private car. Hertzog said that two of the victims were admitted: one for surgery for a damaged hip and another for observation. The others were treated and released.

Archbishop Wuerl told those gathered for the prayer service that “it is appropriate we come together to support one another.”

“We gather together as a community and come together in solidarity and prayer,” he said. “We place before (God) our sorrow and our commitment to one another.”

The archbishop also offered prayers for all Metro employees, noting that “we support Metro. Hundreds of thousands of passengers are transported safely each and every day.”

Susan Gibbs, the archdiocesan spokeswoman, said in a statement that “our hearts and prayers go out to the entire Metro family as well as all those who were injured or died in yesterday’s tragedy, and their families.”

“The Archdiocese of Washington worked closely with Metro last year during the papal visit, and (we) are grateful for the professionalism and commitment of the Metro staff to providing safe and efficient service for our community, which we experienced firsthand during the April 2008 papal Mass,” she said.

John Catoe, Metro’s general manager, opened the prayer service by calling the accident “a very tragic time for us.”

Calling for a moment of silence to remember and pray for McMillan and her family, Catoe said, “My heart and soul goes out to those who were injured and those who lost their lives. My heart aches today.”

“We need to grieve and we need to pull together,” he told Metro employees.

“We will find the cause of this tragedy and we will find a solution,” Catoe promised.