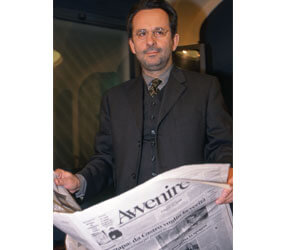 VATICAN CITY – An unusually acrimonious fight has erupted this summer between the Vatican and the government of Italian Prime Minister Silvio Berlusconi, fueled by growing unease over Berlusconi’s personal life and some of his government’s policies.

The conflict was unusual because church leaders in Italy have generally supported Berlusconi’s center-right coalition, which in turn has favored church interests in areas like state aid to private schools and pro-life issues. After Pope Benedict XVI met with Berlusconi in 2005, a statement from the prime minister’s office trumpeted the “special convergence between the direction of Italy and the moral and religious objectives of the Catholic Church in the world.”

That special relationship took a hit in August, when Archbishop Antonio Maria Veglio, president of the Pontifical Council for Migrants and Travelers, lamented the deaths of more than 70 Eritreans trying to reach Italy in a boat and implicitly criticized the Berlusconi government’s tough new policies on immigration.

Ministers in Berlusconi’s Cabinet responded by sarcastically suggesting that the Vatican open its own doors to the immigrants, then questioning Archbishop Veglio’s expertise and authority to speak for the Holy See.

An editorial in Avvenire, the newspaper of the Italian bishops’ conference, went much further, saying the government’s lack of concern for the plight of African immigrants was comparable to public indifference to the Holocaust in Nazi Germany.

Avvenire’s director, Dino Boffo, has been an increasingly pointed critic of Berlusconi on this summer’s longest running story in Italy: the prime minister’s fondness for young women. After Berlusconi’s wife announced she was divorcing him because of his various infatuations, more detailed accusations emerged, including a prostitute’s allegation that she spent the night with the prime minister.

Attention also focused on the special favors the 72-year-old Berlusconi bestowed on an 18-year-old woman in southern Italy. Other women were said to have been paid to attend the prime minister’s parties at his Sardinian villa, and photos of nude men and women at the parties were printed in European newspapers.

Played out daily in the media, the story resembled a cross between a soap opera and “Satyricon.” Berlusconi denied he had ever paid for sex and blandly defended his private life by saying: “Italy has a lot of beautiful girls, and I’m no saint.” He portrayed himself as a martyr of the leftist press.

But the more Berlusconi personalized the issues, the less comfortable many Italian Catholic leaders appeared. Again, it was the Catholic newspaper Avvenire that stepped up the criticism of the prime minister – a fact that would not be forgotten.

The impression among Rome observers was that the Vatican was doing everything it could to avoid a rupture with a government that it viewed as an ally on several important issues.

In late August, the Vatican secretary of state, Cardinal Tarcisio Bertone, was to host Berlusconi at a dinner in L’Aquila, the central Italian city devastated by an earthquake in April. The occasion was the city’s annual “feast of forgiveness,” a theme and a setting that seemed to offer a perfect public relations opportunity for the Italian prime minister.

But the morning of the dinner, a newspaper article turned the “feast of forgiveness” into a fiasco. Il Giornale, a paper owned by Berlusconi’s family, published a front-page attack on Boffo, the Avvenire editor, under the headline: “The super-moralist was condemned for molestation.” It claimed that Boffo, now one of Berlusconi’s toughest critics, had been found by an Italian court in 2002 to have harassed a woman after having a homosexual relationship with the woman’s husband.

Church leaders reacted with outrage. Berlusconi quickly canceled his participation at the L’Aquila event, reportedly after the Vatican disinvited him. Italian bishops called Il Giornale’s article “disgusting” and defended Boffo, saying the court case was based on false and anonymous allegations. But the newspaper kept up its campaign, essentially accusing the bishops and Boffo of lying. On Sept. 3 Boffo resigned, saying he and his family could no longer put up with the “war of words” that had been unleashed.

The Vatican was left indignant. For days, Vatican officials had fully backed the Avvenire director, and Cardinal Bertone had personally called Boffo to express his support.

A perennial question at the Vatican is how deeply to involve the German pontiff in Italian affairs. In this case, a public intervention by the pope was ruled out. But on Sept. 1, at the height of the conflict, the pope did make a phone call to Cardinal Angelo Bagnasco, president of the Italian bishops’ conference, as a sign of his solidarity with church leaders.

The bishops’ conference said that during the course of their conversation the pope “asked for news and an evaluation of the current situation.” It’s not clear how closely Pope Benedict has been following the whole distasteful story, or how detailed Cardinal Bagnasco’s briefing was, but one can only imagine the pope shaking his head at the other end of the line.