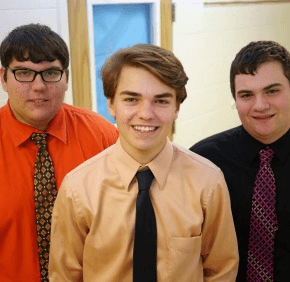 Nicholas Schiavone, Nicholas DiLeonardi and Nicholas Schleicher – all seniors at Our Lady of Mount Carmel School – share the same first name, but attempts to find a common influence were unsuccessful.

“I was either Nick or Nicole, if I was a girl,” Schleicher said.

“I was Nick or Ashley,” Schiavone shrugged.

“I was always Nick,” DiLeonardi said. “They knew I was a boy from the beginning.”

“The three Nicks” – a moniker that elicits polite if somewhat weary smiles – are among 60 high school seniors in the Archdiocese of Baltimore that have been named Distinctive Scholars. All will be honored at the 23rd annual Distinctive Scholars Convocation, April 14, 7 p.m., at Maryvale Preparatory School in Lutherville.

The three Nicks all play golf, are rock-solid students and leaders among their peers. Biographies provided by the archdiocese note some of their more distinguishing characteristics

Schiavone is described as “honest,” not for a definitive, I-chopped-down-that-cherry-tree moment, but for his standard operating procedure.

“If something arises where people are having trouble getting answers,” explained Schiavone, who tutors middle- and high-school students in math and language arts, “I’ll help them arrive at the answers, but I won’t give them away.”

His 4.26 QPA (similar to a GPA, but weighted for honors courses) puts him at the top of his class. He plans to study computer science at Towson University or Stevenson University and wants to work in cyber security, for the Department of Defense.

In addition to his 4.2 QPA, 14 college credits already earned, and three seasons of athletic pursuits, Schleicher’s bio notes that through it all he has held down a part-time job, bussing tables at a Middle River restaurant.

“I hate being a burden and asking my parents for money,” he explained.

Apparently not busy enough, Schleicher joined the wrestling team as a senior.

“A couple of my friends were talking about how they needed wrestlers,” he said. “I figured I would do something for the winter and help them out.”

Described as “affable and pleasant,” Schleicher is either immune to stress or hides it well.

“I just kind of accept things how they are,” he said. “I don’t complain.”

Neither does DiLeonardi, who has, according to his bio, “a smile that would rival that of his legendary red-suited namesake (Santa Claus).”

DiLeonardi, an academic team member and Ethics Bowl veteran, will pursue a civil engineering degree at Penn State University. He wants to design wind farms and hydroelectric dams, and, though his peers elected him a student representative, will avoid politics.

“I care about the environment,” he said.

DiLeonardi attributes his success to a strict routine.

Morning is getting ready, after school is sports, late afternoon is homework, and the evening is “to relax and finish the day.”

“I’ve been that way since the start of high school,” he said.