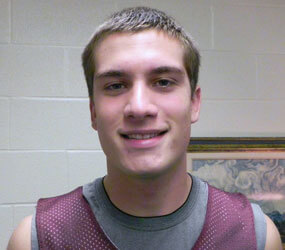 CUMBERLAND – Geno Taylor, the head football coach at Bishop Walsh School, was asked how it was able to field a team this year, with only 90 boys total in grades 9-12.

“That is where Greg Hendershot comes in,” said Taylor, who was in his first year as coach. “At the start, we were down to about 12, 13 kids. “He started opening the weight room. Kids saw his excitement and they started coming in. At one time, we were up to 28 kids.”

After a 1-9 season in 2010, when Hendershot was the team MVP, Bishop Walsh went 4-4 this season. The senior quarterback capped a fine campaign by passing and running for five touchdowns and more than 250 total yards in a 57-47 victory over Randolph-Macon (Va.) Academy.

Hendershot hasn’t slowed down. He is currently a forward on the basketball team, and plays baseball in the spring. He’s also a member of Walsh’s theater group, the Chess Club and carries a 3.5 GPA, among the reasons he is a member of the National Honor Society.

“My parents, teachers and coaches have emphasized grades from day one,” Hendershot said. “Academics are very important because you want to be the best you can be.”

He points to his parents, Jennifer and Harold “Butch” Hendershot, as great examples. His mother has taught at Bishop Walsh for 31 years, and his father has an interesting take on what makes him most proud about the contributions of the youngest of their three sons.

“I am a 1968 graduate of Bishop Walsh,” the father said. “That kid has raised and lowered the flag in front of that school almost every day, all through high school. He is civic-minded and patriotic. Those are the things that make me most proud.”

Those acts are an extension of his mother’s admiration for the school.

“The kids are kind and polite,” she said. “Bishop Walsh creates a spiritual aspect that we are in the presence of God and we do it for a higher purpose.”

The leader of the football team, the 6-foot-3 Hendershot is accustomed to a smaller role in basketball, but will most likely start this season because of injuries to others.

“Greg is the ultimate team player,” basketball coach Bob Boyle said. “He’s very coachable, gets along with all his teammates and works hard all the time.”

Hendershot and the Spartans are buoyed by last season’s victory in the prestigious Alhambra Catholic Invitational Tournament, their first in 15 years in the tournament in which it plays local host to some of the best teams in the nation.

“It was great,” said Hendershot, who started in that 61-60 victory over St. Benedict’s Prep of Newark, N.J. “They had played the No. 1 team in the country and lost by only 8 points.”

He hopes to play college football.

“He’s got a strong arm and a quick release,” said Taylor, the football coach. “He can excel at any division. The college level weight rooms and trainers are really going to get him going.”

“When the pocket collapses,” Rhodes said, “he doesn’t break under pressure, he can scramble out and still throw a nice pass. With his work ethic, he has a great chance at college.”

“I want to go where I will get a good education,” he said, “because that is first and foremost.”