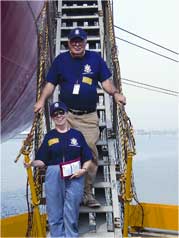 In port, that is, and available as the official welcome wagon for foreign merchant sailors who set sail from home months ago.

In Baltimore, these young men – who sometimes haven’t seen their wives and kids for months – get a friendly greeting from volunteer ship visitors who show up with magazines, rosaries, prayer cards, a free ride and big smiles, working through the archdiocese’s Apostleship of the Sea (AOS) Stella Maris ministry.

The “mama” and the “doc-a-ter” are nicknames bestowed by some of the sailors on Marion and Paul Bossle, the first married couple to come aboard as ship visitors for AOS. In ports twice weekly since Mr. Bossle, 70, retired in June, the Cathedral of Mary Our Queen, Homeland, parishioners are buoyant about their new sea-related duty.

“No one thinks of them,” said Mrs. Bossle, 65, “they fall through the safety net. They’re neglected, isolated and invisible to the local charities. We’re doing something to help them.”

Joe Bucchieri, the associate director of AOS, has noticed the couple has gained respect from the crews.

“It would seem that knowing Paul is a retired chemist and with Marion providing that genuine motherly spirit of family,” said Mr. Bucchieri, “the crews have embraced them by giving them these special nicknames.”

Mr. Bucchieri said many times while on board, he was told, “The doctor and mama were here this morning and took us off ship!”

The Bossles said they’re happy to transport the merchant sailors to local shopping centers, where they can purchase gifts for their families all over the world. The guys seem to know what’s around Baltimore, said Mrs. Bossle, and know if they get lost while shopping or sightseeing, merely to look for “the people with the blue seaman’s hat with the anchor on it.”

The son of a merchant mariner, Mr. Bossle is in his element around the port. He loves ships and anything to do with them.

“It’s very interesting!” he said. “They rarely get off the ships – not enough opportunity.”

Ships are docked in isolated areas and stay in port usually no more than a day and a half.

“Sailors would have to walk two miles to get off port,” he said. “It’s way far back. And cabs can’t come into the terminal – anyway they would soak them (in fares)! That’s where we come in. Our most important function is to provide free van service.”

Sometimes the sailors are driven to the AOS Seafarer’s Center in Dundalk where they can use the Internet, play games, watch television, send mail and buy phone cards. The religious icons given to the men are blessed by Monsignor John L. FitzGerald, director.

“They immediately put the rosaries around their neck and say, ‘Good, now I’m safe!’ ” said Mrs. Bossle. “We love it. They tell us all about their families, how things are on the ship. We learn a lot about their countries.”

Every so often a lady captain will appear in port. “She’s glad to see another woman!” said Mrs. Bossle.

If sailors do not have shore leave, the ship visitors stay onboard in the crew’s “mess” for a visit, sometimes to share a cup of coffee or lunch.

“In general,” said Mrs. Bossle, “we offer them friendship.”