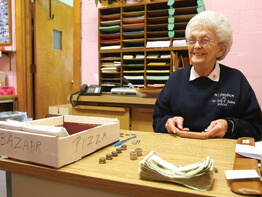 When Marie Beck first started volunteering at Our Lady of Fatima School in Baltimore 16 years ago, her grandson always called her “grandmom” when he saw her on campus.

Before long, other students began addressing Ms. Beck as their “grandmom,” too. The name stuck and that’s how Ms. Beck is now known by everyone from the preschoolers to the principal.

Wearing a blue sweatshirt proclaiming her the “#1 Grandmom at Our Lady of Fatima,” Ms. Beck said she considers the title a tremendous honor.

Ms. Beck’s duties at Fatima have included everything from counting money on hot dog day to sitting with a class during a spelling bee. Before age caught up with her, she even played basketball at recess with the children.

Her favorite part of the day is getting random hugs from children.

“Every day they tell me they love me,” said Ms. Beck, attentively at work counting the hot dog orders for lunch.

“I just love them,” she said. “I tell them I want to see their names in lights some day.”

A former volunteer visitor to the VFW hospitals, Ms. Beck said she’s glad she “got roped into” volunteering at Fatima. There’s no other way she’d rather spend mornings and afternoons.

“I’m like the gopher,” said Ms. Beck, proudly pointing out that she has served four different principals.

“Whatever the teachers need, I do,” the white-haired woman said. “I love it.”
The entire school recently surprised Grandmom with a party celebrating her 80th birthday.

“She’s a familiar face that greets the children every day,” said Cathy Gallagher, principal. “It’s a comfort to the children. When she’s not at her desk, they ask where she is. She’s an inspiration to everyone.”