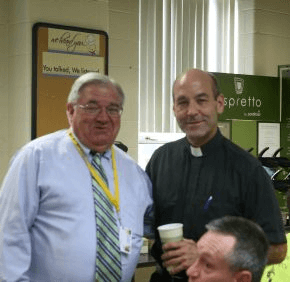 Editor’s note: Joseph F. Gorman, vice president for finance and administration at Neumann University in Aston, Pa., met Paul McMullen, managing editor of the Catholic Review, and Father John Lombardi, pastor of St. Peter in Hancock, as they passed through Aston on their way to Philadelphia to attend Mass celebrated by Pope Francis.
Gorman, it turns out, has substantial history with the Archdiocese of Baltimore. The following is his commentary.
I started elementary school at the former St. Mary of the Assumption School in Govans and moved to the York Road location when I entered the second grade. I was taught by the School Sisters of Notre Dame.
I moved to Towson and entered the sixth grade at Immaculate Conception School, where I was educated by the Sisters of St. Francis of Philadelphia. They are the same sisters I work with today at Neumann University. Sister Catherine Georgine, who now lives in Assisi House, a literal stone’s throw from the university, taught me music in the sixth grade.
At both schools, we had contests to sell subscriptions to the Catholic Review. As I recall, I think “Catholic Review month” was October. My personal record was three subscriptions; I choose a bike lock for my prize. Another year I won a bike horn, which I used as I rode my bike to school in the fifth grade. Of course there was always some kid with a large family who would sell 10 subscriptions and get a special award.
Since Father Lombardi went to Towson University, I can remember hearing the bells in the tower at Towson State Teachers College, as it was known then, on Labor Day night. To me, that sound meant the end of summer vacation, and the next day I would be off to Immaculate Conception School.
I attended Calvert Hall College High School in Towson. To this day I still occasionally see my chemistry teacher, Christian Brother Kevin Stanton. My Calvert Hall claim to fame is that I was the last football player to score in a tie football game. It was a tie with Loyola Blakefield in 1962; there have been no ties since. It was a great thrill, as the game was played at Memorial Stadium in Baltimore.
I went to Penn State and majored in accounting, played lacrosse and was fortunate enough to be a member of the accounting honor society. I worked for PNC Bank for 34 years, serving as vice president in various areas – retail banking, lending, finance and mutual funds.
I came to Neumann as vice president for finance and administration in October 2007.
My Catholic faith is very important to me. My mom and dad were devout Catholics and set the example in our home and practiced the faith, especially in challenging times. The religious sisters and brothers who taught me influenced me, although I didn’t realize their good works until I was an adult.
Several priests were excellent homilists and I remember their sermons to this day. My faith certainly took me through some rough times in Vietnam. My wife, Mimi, and I have been blessed with our faith, family and friends.
There have been certain times in our life together when Mimi and I have looked at each other and said, “Thank God we have our faith,” because it was the only thing that got us through several crises.
Your journey to see the pope is certainly an outward sign of faith and devotion to God and the Holy Father. May the young people in your group grow in the love of Our Lord and use their talents wisely to reflect the goodness of the Lord. May all of you be safe in your travels, and may the Lord take care of each of you.
-Joe
PrevNext