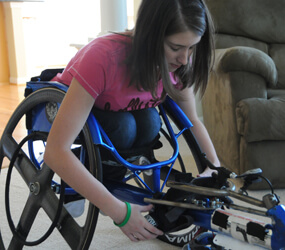 STAFFORD, Va. – If there’s one thing Kelli Kellen, a parishioner of St. William of York Parish in Stafford, can attest to, it’s the sanctity of life.

“I think that we are all here for a reason,” she said. “God has a plan for us and everybody has their abilities.”

Having grown up in the church, such a belief was fully ingrained in Kellen by the time she became pregnant with her second child, Kelsie.

At 17 weeks, doctors informed Kellen and her husband, Scott, that Kelsie would be born with spina bifida, a birth defect caused by the improper closure of the embryonic neural tube. As a result, doctors expected Kelsie would be severely mentally handicapped and would never live independently or take care of herself. She might not even survive birth, they said.

Because of the doctors’ predictions, a genetic counselor urged Kellen to terminate the pregnancy.

“He called me four or five times to tell me about a doctor in Kansas who would take care of this for me,” Kellen said. “And it got to the point where I told him, ‘Enough. Don’t ever call me again.’”

Knowing the risks, Kellen decided to go through with the pregnancy.

The doctors were partly correct – daughter Kelsie was born with spina bifida and has spent much of her life in and out of doctors’ offices.

She has limited use of and feeling in her lower body. From ages 4 to 11, she walked with crutches, and for the last two years, she has used a wheelchair.

But 14-year-old Kelsie is not mentally handicapped and she has not let her condition get in the way of her independence. Instead, she has found her niche in the world of wheelchair sports.

She has tried her hand at a little bit of everything – basketball, hockey, track and field, swimming and even surfing.

She is a part of a military family and has lived all over the country. Since early 2008, her family has lived in Spotsylvania, where opportunities for disabled athletes are rare. So Kelsie dropped basketball and hockey and now focuses her attention on two main sports – track and swimming.

Though she has been competing only since 2006, she is already making a name for herself as a dedicated and talented athlete, as evidenced by the more than 100 awards she has won.

The competitions take place all over the country, and Kelsie has adjusted to her hectic travel schedule. In fact, she loves everything about it – seeing the country, meeting new people and, of course, racing.

“It is actually harder to get used to being home,” said Kelsie, who is home-schooled and trained by her mother. “I was only home for a total of three weeks this summer. I’m used to hotels and getting up early to go to meets and train.”

In 2008, she missed making the paralympic track team by less than a second. This summer, she was one of six U.S. girls chosen to compete in the International Wheelchair Games in Switzerland. Last year, she was chosen as American Girl’s Real Girl of the Year, which gave her the opportunity to go to Los Angeles and meet professional figure skaters Christina Yamaguchi and Mirai Nagasu.

But it is not for the recognition that Kelsie participates in wheelchair sports.

“I’ve met so many amazing people and I’m healthier than I was before I was doing anything,” she said. “And it’s so much fun.”

Before Kelsie started training, she would be hospitalized for pneumonia once or twice a year. She hasn’t had it since becoming an athlete.

Kelsie wants to win a track scholarship to college so she can become a forensic analyst. She wants to swim next March at the Canadian-American Games in San Antonio, and, most of all, she wants to compete in the 2012 Olympic Games in London.

Kelsie is confident she can achieve her goals by working hard. She hopes more disabled kids will get involved in sports as well.

“It keeps us healthy and gets us out there where we can show people we don’t just sit at home in a wheelchair all day not doing anything,” she said. “We are active in the community and we can do all the stuff anyone else can.”