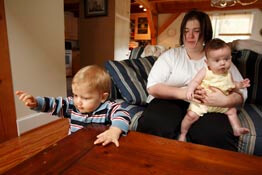 He feels it is only a matter of time before Roe v. Wade, the 1973 Supreme Court decision legalizing abortion, will be overturned and the pro-life movement needs to be ready to respond to pregnant women who need a safe haven.

“We have done the marches, we have held the banners, this is absolutely the next step,” added the priest, who is parochial vicar at St. Mary of Sorrows Parish in Fairfax.

Last year Father Starzynski opened the Paul Stefan Home for Unwed Mothers, which is named for a baby born without lungs who survived for one hour. So far, nine women have stayed in the home and six babies have been born. Currently, the home has three residents. By the end of this year, another house will open on the same 50-acre property in Orange County.

The priest is confident Roe will be overturned, an event he predicts will be like the fall of the Berlin Wall in Germany in 1989.

“It’s not a matter of if, but rather a matter of when,” he said about the law being overturned. “We’re moving in that direction. It’s only a matter of time. No evil can stand on its own.”

“We are going to have millions of unwed mothers” when that happens, he said. Currently, about 37 percent of all babies born in the U.S. are born to unwed mothers, he noted.

In an interview with the Arlington Catholic Herald, newspaper of the Arlington Diocese, he said that he has relied on God’s help in his efforts to help unwed mothers. The initial idea to open a home for them started with what he described as a deep stirring in his soul.

Two years ago he was praying for a Catholic couple, Randy and Evelyn James, who were expecting their sixth child, but there were complications during the pregnancy. His prayers for the family were intertwined with prayers for a home for unwed mothers.

When doctors learned that the couple’s baby would not develop lungs, doctors advised the Jameses to have a late-term abortion, something they refused to consider. It was during that time when the couple knew in their hearts that, “whether or not he survives, we have to plunge ourselves in the pro-life movement,” said Evelyn James.

When their son, Paul Stefan, was born, his middle name was chosen in honor of the priest who prayed for him unceasingly. The baby was baptized and lived for about one hour.

Although it was a time of deep anguish for them, it also was a time of peace for the couple who said they knew God had a distinct plan. After Paul Stefan’s funeral, the couple began to hear more about the home for unwed mothers and felt called to be a part of it.

The next year, as Father Starzynski continued to pray about the possibility of opening a home for unwed mothers, he told his parishioners that he was convinced five of them would donate $1,000 to the project, and five did. At the time he was parochial vicar at St. Patrick Church in Fredericksburg.

Another parishioner told the priest that she and her husband would lease him two homes and 50 acres of land for $1 a year.

“So many extraordinary things have happened … that I almost expect the extraordinary … and lots of miracles,” said the priest, who believes the Holy Spirit is guiding the project.

After renovation work was completed on the two houses, the first home opened last September. Various people and organizations donated furniture and their services to the project.

Women can stay for up to two years, which helps them get back on their feet. After an appearance on the Eternal Word Television Network, Father Starzynski began receiving hundreds of e-mails from people all over the world interested in starting homes for unwed mothers.

“God had to pick the simple people” to carry out this work, the priest said, because simple people will “do whatever God wants them to do.”

God does not pick “the people who know exactly what they’re doing,” the priest added, because they will see the logistics of carrying out such a project as too overwhelming and won’t move forward with it.

Father Starzynski said he often thinks of the apostle Peter getting out of the boat and walking toward Jesus. The faithful must emulate that act of faith, he said.