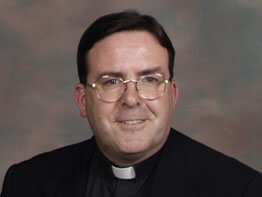 PURCELLVILLE, Va. – A funeral Mass was set for 11 a.m. Jan. 6 for a 53-year-old Virginia priest who died Dec. 31 when a tree fell on him while he was trying to remove debris from another tree from the roadway.

Father Kelly had been attempting to remove debris from Harmony Church Road during the morning hours, when high winds caused another tree to fall on him, according to a published report.

Parishioners told WUSA-TV 9 in Washington they were not surprised that Father Kelly was trying to clear debris from the roadway, because he was the kind of man who always offered his help to anyone in need. He had served at the parish since June 2006.

In a letter to the resident priests and parishioners of St. Francis de Sales, Arlington Bishop Paul S. Loverde called Father Kelly “a faithful and zealous priest not only among you, but in all his previous assignments as well.”

“I join you in the prayer, asking our blessed Lord to give him now the blessed reward of his priestly ministry among us these past 13 years,” Bishop Loverde said. “Your own patron St. Francis de Sales so beautifully reminds us: ‘Life is the time to seek God. Death is the time to find him. Eternity is the time to possess him.’”

Father Kelly served as administrator of St. Francis de Sales from June 2006 to June 2008 when he was named pastor.

Born Dec. 15, 1955, in Newport Beach, Calif., Father Kelly was one of three sons in a military family; the family settled in Alexandria, Va., where he graduated from Mount Vernon High School.

After serving in the U.S. Naval Reserve from 1973 to 1981, he attended Mary Washington College (now the University of Mary Washington) in Fredericksburg, Va., where he earned a bachelor’s degree in history in 1984.

He received his theological education at St. Charles Borromeo Seminary in Wynnewood, Pa., graduating in 1995. His diaconate assignment was at Our Lady of Angels Parish in Woodbridge, Va.. He also served as a deacon at Holy Spirit Parish in Sharon Hill, Pa.

Father Kelly is survived by his father, John Kelly of Colonial Beach, Va., and two brothers, Matthew Kelly of Fredericksburg and Daniel Kelly of Williamsburg.

His funeral Mass was to take place at St. Francis de Sales Church in Purcellville, as was a viewing and wake 6-8 p.m. Jan. 5.

In lieu of flowers, donations are requested for the Wounded Warrior Project, which provides services and programs for severely injured members of the U.S. military. Details are available online at www.WoundedWarriorProject.org.