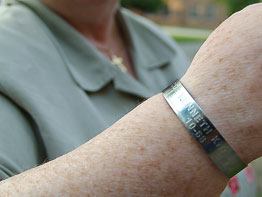 The teacher at Mother Mary Lange Catholic School, Baltimore, has been wearing it for almost 40 years, since the prisoner-of-war and missing-in-action bracelets were sold and distributed during the Vietnam War.

“I feel it reminds me of all the people who served our country and that there are people still willing to do that,” said Sister Stacy, 60. “For some reason I still can’t seem to take it off.”

Sold at the time for $2.50, the bracelets were manufactured in nickel, and bracelets in copper sold for an extra 50 cents.

Recently, Sister Stacy ran into the friend of a friend who had given her the bracelet.

“He was shocked I still wore it,” she said. The name inscribed, Lt. Commander Kenneth Knabb 10/68, is the name she searched for while visiting The National Vietnam Veterans Memorial in Washington, D.C. – known as “the wall.” She found it.

The Vietnam War was “a big issue,” she said. “It was my way of protesting I didn’t think it was right. A lot of young men were dying, and there didn’t seem to be a reason. It was a waste.”

Long ago she wanted to learn information about Lt. Cmdr. Knabb, but little was known about the soldier who was reported by the government as missing in action and later reclassified as deceased. Sister Stacey still prays for him.

VIVA, a Los Angeles-based student organization, was co-chaired by entertainers Bob Hope and Martha Raye, according to Carol Bates Brown, then national chairman, as she recounted the history of the bracelet on the Web site www.thewall-usa.com.

Ms. Brown and a fellow college student came up with idea for the campaign “as a way to remember American prisoners of war suffering in captivity in Southeast Asia,” she wrote.

The campaign kicked off on Veterans Day in 1970, and public response quickly grew to 12,000 requests a day. The money raised paid for bracelet manufacturing and brochures, bumper stickers, buttons and advertising to publicize the POW/MIA issue.

When VIVA closed its doors in 1976, said Ms. Brown, “the American public was tired of hearing about Vietnam and showed no interest in the POW/MIA issue.”

In a small box inside a vanity dresser drawer sits another POW bracelet, its inscription – S/Sgt. Victor Pirker 11/22/65 – etched next to a blue star.

Although its owner, Kathy Glass, no longer wears the bracelet, she once felt very passionate about the symbol while many of her friends were being killed in the Vietnam.
The parish secretary at St. Lawrence Martyr, Jessup, worked for the Pentagon as a secretary for the Air Defense Command when she obtained the bracelet. Explaining her feelings about the war was hard, she said.

“It was a real growing-up time. We were all in high school having fun, and in another year they went into the service,” said Ms. Glass. “A lot of them didn’t come home. It was a hard time.”

She, and others like her, wore the bracelets while protestors pitched tents all over Washington, D.C., and young people wore peace symbols and flowers in their hair.

While researching her soldier’s name on the Internet years later, Ms. Glass learned that Sgt. Pirker was born in 1940 in Trout Creek, Mont., and was a gunner in the Marine Corps.

“I had never known anything more than what was on the bracelet,” said Ms. Glass.

He had been flying over combat in a helicopter that went down. Four men were listed as MIA and promoted in rank during that time, until the secretary of the Navy “approved presumptive findings of death.” The sergeant was presumed dead on Jan. 31, 1974.

In her job at the Pentagon, Ms. Glass remembers tension and watching superiors physically drop from exhaustion.

The then-19-year-old began work at 8 a.m. and sometimes didn’t return to her Arlington, Va., apartment until 2 a.m. Sometimes her boss picked her up from her home in the middle of the night to take her to the office two miles away.