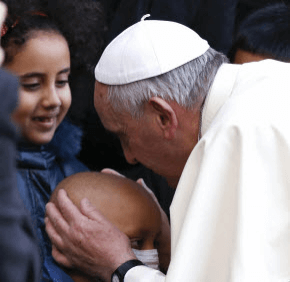 By Anna Maria Basquez
Catholic News Service
ARVADA, Colo. – Veteran Vatican reporter John Allen Jr. took up the old journalist “man on the street” challenge by a priest in the poorest part of Buenos Aires when he sought the truth about how Pope Francis came to be known as a bishop of the poor.
Allen has covered three popes in his career and was recently hired as associate editor of the Boston Globe after years of writing for the National Catholic Reporter weekly newspaper.
He recounted the story in a recent talk about Pope Francis’ first year before a crowd of nearly 500 people at Spirit of Christ Catholic Community Church in Arvada, in the Denver Archdiocese.
Allen visited the place where Pope Francis chose to live for his 12 years as archbishop of Buenos Aires.
“Rather than living in the archbishop’s palace, he chose to live in a very Spartan apartment in the heart of the city where the poor lived,” the journalist said a mid-January presentation. “When I say Spartan, I don’t just mean that in the language of real estate professionals. This was the kind of place that you had to leave the stove on 24/7 over the weekend, because they didn’t have enough money to leave the heat on over the weekend.”
He also visited he slums of Buenos Aires – called the villas of misery – where the future pope, then-Cardinal Jorge Bergoglio, spent much of his time.
He asked the pastor there about Pope Francis being the bishop of the poor, saying, “To what extent is that reality or to what extent is that (public relations)? He replied, ‘Look, why don’t you just go out in the street and ask the people.’“
“On that dare, I went out on the street,” Allen said, “and I polled about five or six people and asked, ‘What do you know about Bergoglio?’ … Before they even vocalized an answer, they all went into these tin shacks they lived in that they called their homes and they came back out with these prized pictures with Bergoglio baptizing their children, or confirming their nephew or sitting in their living room when their husband died because he spent his time there.”
“That’s where he drew the oxygen in his lungs,” Allen added, “to think about what kind of church he wanted.” (*Pope Francis had one of his lungs removed as a young man, presumably after an infection.)
And also, said Allen, to think about what he wants people to see when they see the Catholic Church – service to the Gospel rather than power and privilege.
In his talk, Allen outlined three areas where he believes Pope Francis will have the most impact – leadership as service, the social Gospel and mercy as the core Christian message in this era.
He said he was using three measurements to look at the pontiff’s impact – popular appeal, media appeal and his impact on the culture of Rome.
When it comes to social Gospel, Allen said, Pope Francis has done several interviews so far as pope, and he has said it was not necessary to talk continually about church teachings on abortion, gay marriage and contraception because those are already well known.
“In some quarters I think this has been misunderstood,” Allen said. “There are some who believe what this signifies is the church is somehow pulling back from the Gospel of life. That perception is so widespread. There is no retreat. There is a determination to lift up other elements of Catholic teachings that he believes have not gotten a commensurate level of attention.”
That the pope has widespread popular appeal is a fact, he said. “In every region of the world in which public opinion can be scientifically surveyed, Pope Francis has approval ratings that politicians or celebrities would sacrifice their children to pagan gods to attain,” he joked.
He noted a Pew survey recently found that 96 percent of American Catholics “have a favorable impression of this pope.”
Allen said Pope Francis is expected to come to the U.S. in September 2015 for the World Meeting of Families in Philadelphia.
He said each of three popes he has covered are complex men but have had a signature phrase that gets to the heart of what they are about.
For Blessed John Paul II “it was ‘Be not afraid.’ It was this invitation to the church to recapture its boldness, its missionary self-confidence after the years of introspection and self-doubt that followed the years of the Second Vatican Council.”
Pope Benedict XVI’s phrase was “reason and faith … that reason and faith need one another … to be healthy these two things need one another,” Allen said.
With Pope Francis, it is “the Lord never tires of forgiving,” he said.
“I believe that Pope Francis ultimately is going to be remembered as the pope of mercy,” because he wants the world when it looks at the church to see mercy, Allen said.
Basquez is a freelance writer based in Denver who writes for The Colorado Catholic Herald, newspaper of the Colorado Springs Diocese.
Also see:
Movie Review: Gimme Shelter
Copyright (c) 2014 Catholic News Service/U.S. Conference of Catholic Bishops
PrevNext