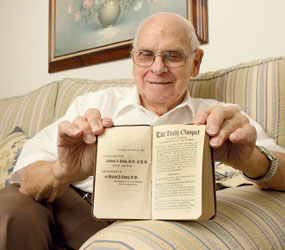 “When the dishwasher is unloaded, the clean ones go on the bottom of the stack in the cabinet,” he explains. “We like things being in order.”

Getzel acquired some of that discipline during the Great Depression, when he was educated at Sacred Heart of Jesus School in Highlandtown. It was drilled further into him by the U.S. Army, in quartermaster school, and sharpened on the West Pacific island of Saipan.

Returning home after World War II, his faith produced a keepsake, one that remains in his possession because, while a self-described packrat, he is an organized one.

Three years ago, Getzel took stock of his memorabilia and leafed one more time through the Catholic version of the New Testament supplied by the U.S. Army. After the opening dedication from President Franklin D. Roosevelt, Getzel was stopped a few pages later, by the following:

According to a 1962 obituary supplied by Tricia Pyne, director of the Associated Archives at St. Mary’s Seminary and University in Roland Park, Sulpician Father Cerny, a professor of Scripture, spent 23 years there.

It wasn’t until 1947 that Washington was separated from the archdiocese, so it was Archbishop Curley, the 10th archbishop of Baltimore, who oversaw church matters in the nation’s capital during World War II.

“I get a kick out of that,” Getzel says. “Here I am, halfway around the world in 1946, and I’m given a prayer book that bears the seal of approval of my archbishop back home.”

It was issued to him and other Catholic soldiers on board the S.S. Marine Lynx in March 1946, seven months after V-J (Victory over Japan) Day. He was heading home, to civilian life.

“I saw a notice on a bulletin board on the ship, that there was going to be a novena,” he recalls. “There wasn’t a Catholic chaplain on board. A Protestant minister apologized for the mix-up, and said, ‘the best thing I can do is give you this New Testament.’ I was glad to have it.”

Getzel already had plenty to give thanks for.

“On Saipan, I was assigned to the general depot,” Getzel says. “We inventoried stocks, replaced parts. We had so much. I thought it was because we were supplying Okinawa. I later found out we were stockpiling material for the invasion of Japan. If it had come to that, I would have been reclassified Infantry.”

Plans for that possibility ceased, as American bombing of Hiroshima and Nagasaki led to surrender by Japan.

“To be frank, I was thankful for the atomic bomb,” Getzel says. “Without it, I might not be here.”

He and Helen married in 1953, and raised three children. He worked for three employers, was active in the Catholic War Veterans and gave countless hours to the Boy Scouts of America as an adult leader.

The Getzels used to be parishioners of St. Casimir in Canton. They now attend St. Brigid, a few blocks walk from their home.

On a typical Friday morning, Getzel, 84, reads from his cherished copy of the New Testament, opening a flood of memories.

“By the grace of God,” he says, “I don’t know why I kept it this long. It’s my little bit of history.