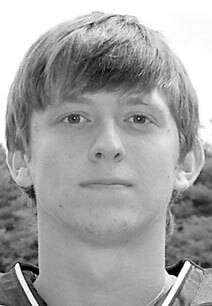 When The Catholic Review asked high school athletic directors in the Archdiocese of Baltimore to nominate deserving students for a new feature that gives classroom and off-the-field accomplishments the same weight as athletic prowess, the first person nominated was Jared Matthews.

A senior at Bishop Walsh School in Cumberland, Matthews is accustomed to taking a leadership role, so it’s fitting that he kicks off The Review’s “Putting the STUDENT in Student-Athlete.”

Last fall, Matthews directed the Spartans to a milestone football season, as a 9-1 record matched the most wins in the history of a program that began in 1966. He threw for 747 yards and six touchdowns, as Bishop Walsh set a school record with 317 points.

Matthews also plays basketball and baseball for the Spartans, although rotator cuff surgery in December 2008 sidelined him in both sports as a junior.

The injury hardly idled Matthews, as he kept statistics for the basketball team and played the lead, Nathan Detroit, in Bishop Walsh’s production of “Guys and Dolls.”

He’s also been involved in the school’s mock trial team, which went 7-1 during his junior school year. Matthews umpires baseball in a local Dapper Dan league, and adds his spirit to the vibrancy of Cumberland’s St. Patrick Parish.

An altar server through the eighth grade, Matthews is a cantor and sacristan. He credits his parents, Vonda and Marty, for helping form his faith, and a large extended family.

“My dad is one of eight,” Matthews said, “and it’s like a family reunion every weekend at St. Patrick.”

Asked his favorite subject, Matthews answered science. Eyeing a career in medicine, he plans to study biology at either the University of Maryland, Loyola College or Johns Hopkins University.