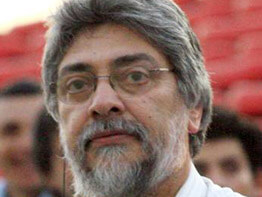 ASUNCION, Paraguay (CNS) — The Vatican warned an inactive Catholic bishop that he faces suspension from the priesthood if he pursues his goal of winning opposition support to run for the Paraguayan presidency.

On its Web site, the Paraguayan bishops’ conference posted the warning, signed Dec. 20 by Cardinal Giovanni Battista Re, prefect of the Congregation for Bishops.

Bishop Fernando Lugo Mendez, the 57-year-old retired bishop of San Pedro, announced publicly Dec. 25 that he intended to leave the priesthood to run as the presidential candidate of an opposition party or coalition in the April 2008 elections.

Cardinal Re wrote to Bishop Lugo, “In the name of Jesus Christ, I exhort you to reflect seriously on your behavior and on the effect this could have on you and on the church.”

The letter said the Vatican learned “with surprise” of his intention to run for the presidency.

“You know well,” the cardinal told him, that canon law “prohibits clergy to assume public offices that carry a participation in the exercise of civil power,” whether in the legislature, presidency or judiciary.

Serving as president “is not congruent with the priestly and episcopal mission, which has as its fundamental objective the salvation of souls,” the cardinal wrote.

While bishops also must be concerned about the social problems of their people, that concern must be expressed in a way that is consistent with their role as the spiritual leader of the faithful, the letter said.

In addition, the cardinal said, a bishop must be a symbol and servant of unity, which is impossible if he runs as a candidate in a multiparty democracy.

If Bishop Lugo formally becomes a candidate, Cardinal Re said, it would “be in clear contrast with the serious responsibility of a bishop of the Catholic Church called to promote and defend the unity of the church, its doctrine, worship and discipline.”

Cardinal Re told the bishop that if he continues to promote himself as a candidate there would be, “as a first sanction, the canonical penalty of suspension,” which would prohibit him from any public exercise of his priesthood.

After Cardinal Re’s letter was published, the Vatican press office said Dec. 28 it had no further comment.

Bishop Lugo was ordained to the priesthood in 1977 and named bishop of San Pedro in 1994. Pope John Paul II accepted his resignation as bishop of the diocese in January 2005. The Vatican announcement of his resignation referred only to the provision in canon law for bishops to retire before age 75 for health or other serious reason.