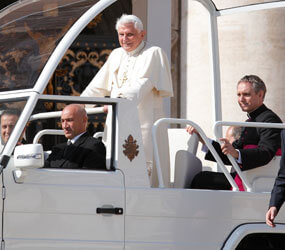 VATICAN CITY – The Vatican will decide how to proceed with the young woman responsible for knocking down Pope Benedict XVI during Christmas Eve Mass only after it reviews medical and Vatican security reports, said Vatican spokesmen.

Critical to the prosecutor’s decision will be the doctors’ evaluation concerning the woman’s mental state and whether or not she was “of sound mind,” Father Ciro Benedettini, vice director of the Vatican press office, told Catholic News Service Dec. 28. The prosecutor will also take into consideration eyewitness accounts, he said.

When the Vatican prosecutor has all the information, including a medical evaluation, he can recommend acquitting her of any crime, handing her over to Italian or Swiss authorities, or handing down a sentence, Father Benedettini said.

The prosecutor will send his recommendation to the Vatican tribunal, which will then make the final ruling, he said.

Susanna Maiolo, 25, jumped a security barrier at the start of the Dec. 24 liturgy as Pope Benedict processed into St. Peter’s Basilica. As Vatican security guards tackled her to the ground, she was able to pull on the pope’s vestments, causing him to lose his balance and tumble to the marble floor.

The woman, who has Italian and Swiss citizenship, was taken away by papal guards. She was not armed but she showed signs of mental instability, according to a Vatican statement Dec. 25.

Immediately after the incident the pope was back on his feet and appeared unharmed. The Mass and other papal events took place as scheduled.

Maiolo was transferred Dec. 25 to a psychiatric hospital in Subiaco, about 45 miles outside of Rome, for what the Vatican called “mandatory clinical treatment.”

Maiolo “remains under compulsory clinical treatment and the case remains under the jurisdiction of the Vatican judiciary,” said Jesuit Father Federico Lombardi, Vatican spokesman, in a written statement Dec. 26. Because the incident occurred on Vatican territory, it is up to the Vatican’s judicial system to determine whether or not to initiate legal proceedings. The Vatican can turn the case over to Italy for prosecution.

The Vatican statement said its prosecuting attorney “will have to take into consideration the reports from doctors and Vatican security personnel, and, in light of these, evaluate possible further steps to take.”

While the pope was unharmed by the attack, French Cardinal Roger Etchegaray, 87, suffered a broken hip and spent Christmas in Rome’s Gemelli hospital. He underwent surgery and received a total hip replacement Dec. 27. The operation was successful and the cardinal’s condition was good, the Vatican said in a written statement later that day.

Vatican sources confirmed that Maiolo was the same person who attempted to rush the pope at midnight Mass in 2008, but had been tackled by guards before she could reach the pontiff.

When asked what kind of precautions the Vatican was going to take in order to prevent Maiolo from having an opportunity to repeat something similar at future papal events, Father Benedettini told CNS that for security reasons the Vatican would not reveal what strategies it intended to take.

Domenico Giani, director of Vatican security services, told the Italian daily Il Messaggero Dec. 27 that the number of people “that are stopped because they get too close to the Holy Father are many, even if we do not publicize it.” Giani was the guard that tackled Maiolo in 2008 and 2009.

Father Lombardi told reporters Dec. 27, “The pope cannot be shielded 100 percent unless a wall were created between the pope and the faithful, which is unthinkable.

“Security measures could be intensified, but this will be decided by the appropriate parties. However, it’s necessary to dispel the illusion that there is zero risk,” he said.

Because the pope wants to be close to the people, Vatican guards cannot always keep “similar episodes from happening” in the future, Father Lombardi added.