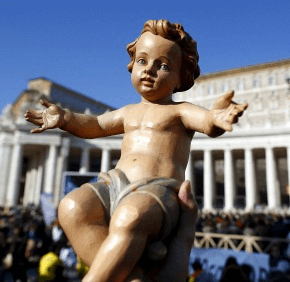 By Junno Arocho Esteves
Catholic News Service
VATICAN CITY – A homeless woman was offered a place to stay at a Vatican women’s shelter after she gave birth to a baby girl near the colonnade surrounding St. Peter’s Square, the Vatican spokesman said.
Jesuit Father Federico Lombardi, Vatican spokesman, said the Romanian woman, who is one of many homeless in the city, gave birth to the baby in the early morning hours Jan. 20 in Piazza Pio XII, just outside of Bernini’s colonnade. Local police, who helped with the delivery, transported the mother and child to the nearby Santo Spirito Hospital.
Father Lombardi told journalists that Archbishop Konrad Krajewski, the papal almoner, was notified of the birth and immediately went to visit the woman at the hospital. The Vatican spokesman said Archbishop Krajewski offered the mother and child a place to stay at a Vatican-owned shelter for women, which the Missionaries of Charity run in Rome.
Although the woman has used various relief services offered by the Vatican, Father Lombardi said it was unknown if the woman accepted Archbishop Krajewski’s offer.
When asked by journalists whether the offer of shelter came directly from Pope Francis, Father Lombardi said: “Everything that is done for the homeless and all of Archbishop Krajewski’s activities are done in the pope’s name.”
Copyright ©2016 Catholic News Service/U.S. Conference of Catholic Bishops.
See also:
No one is excluded from the mercy of God, pope says at audience
Dialogue, remembrance, peace highlighted as pope visits synagogue
PrevNext