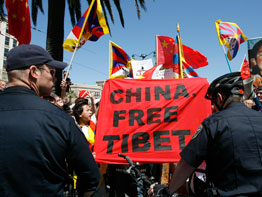 VATICAN CITY – The Olympic Games and sports in general should be activities that foster peace and dialogue, not political wrangling and conflict, said one Vatican official.

Cardinal Renato Martino, head of the Pontifical Council for Justice and Peace, expressed his disappointment over calls to boycott the opening ceremony of the Olympics in Beijing this summer.

Activists and some political leaders are calling for high-profile figures to skip the ceremonies as a way to protest China’s human rights record.

The Italian cardinal told reporters at the Vatican April 11, “I am very saddened that (people) want to link a peaceful competition with politics, wrangling, discrimination, etc.”

“Everyone – athletes, politicians, heads of state – will judge according to their own consciences whether to go” to the 2008 Beijing Olympics, he said.

“But I still assert that sport is a wonderful thing” that should foster peace, not conflict, he said.