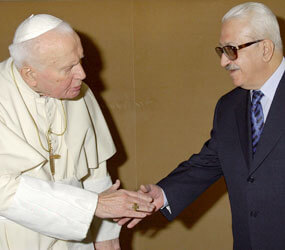 VATICAN CITY – The Vatican hopes the death penalty will not be carried out against former Iraqi Deputy Prime Minister Tariq Aziz, 74, said the Vatican spokesman.

“The position of the Catholic Church on the death penalty is known,” the spokesman, Jesuit Father Federico Lombardi, said Oct. 26, the day the Iraqi high court sentenced Aziz to death by hanging.

“Therefore, it is truly to be hoped that the sentence against Tariq Aziz will not be carried out, precisely in order to favor reconciliation and the reconstruction of peace and justice in Iraq after the great suffering it has undergone,” he said.

Father Lombardi said the Vatican might use diplomatic channels to intervene in the case.

The court sentenced Aziz, a Catholic who also served as foreign minister for then-Iraqi President Saddam Hussein, for persecution of Shiite religious parties.

Aziz has 30 days to appeal. His Jordan-based lawyer told The Associated Press they were consulting about their next moves.

Aziz, who spoke English fluently, was often the face of Saddam’s regime in the 1990s and before the U.S. invasion of Iraq in 2003, when he surrendered to U.S. forces.

In 1998, Aziz traveled to the Vatican and met with Pope John Paul II. Aziz told Rome reporters he gave the pope a letter from Saddam asking the Vatican’s help in lifting the U.N.-imposed sanctions on Iraq.

Aziz met with the pope again in 2003, as the Vatican engaged in a flurry of diplomatic activity to try to prevent the U.S.-led invasion.

During that same visit to Italy, Aziz was invited by the Franciscan friars in Assisi, to pray at St. Francis’ tomb. Many Italians complained that the Franciscans were being used by a man who since 1979 had been the No. 2 official of a regime guilty of serious human rights abuses.

In June 1992, when Iraqi officials refused to renew an agreement that would allow Mother Teresa’s Missionaries of Charity to remain in Baghdad, Chaldean Patriarch Raphael I Bidawid appealed to Aziz, and the nuns were allowed to stay.