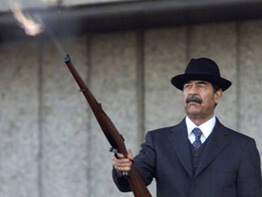 VATICAN CITY (CNS) — Executing someone guilty of a crime “is not the way to restore justice and reconcile society,” the Vatican spokesman said after Saddam Hussein was hanged Dec. 30.

Jesuit Father Federico Lombardi said, “A capital execution is always tragic news, a motive for sadness, even when it involves a person found guilty of serious crimes.”

In a formal statement issued shortly after Saddam’s death was announced, Father Lombardi said, “The position of the Catholic Church against the death penalty has been reaffirmed many times.”

The death penalty not only will not restore justice in Iraq, but also can “increase the spirit of vengeance and sow new violence,” he said.

“In this dark time in the life of the Iraqi people one can only hope that all leaders will make every effort so that in such a dramatic situation spaces will open for reconciliation and peace,” he said.

Cardinal Renato Martino, president of the Pontifical Council for Justice and Peace, who earlier had expressed hope that the execution would not be carried out, told Vatican Radio Dec. 30, “I hope and pray that this act will not contribute to aggravating the already critical situation in Iraq, a country already so harshly tried by divisions and fratricidal struggles.”

The cardinal said the Catholic Church’s opposition to the death penalty is based on its recognition of every human life as a gift of God that must be defended from conception to natural death.

“That position excludes abortion, experimentation on embryos, euthanasia and the death penalty, which are denials of the transcendent dignity of the human person created in the image of God,” he said.

Latin-rite Archbishop Jean Sleiman of Baghdad told Vatican Radio justice was not served by hanging Saddam. Although he hoped it would not worsen the situation in the country, he said “it could.”

“We already are in a situation that is more than tragic on the level of security, relations among populations and also the economy of the country,” he said.