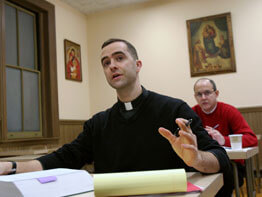 WASHINGTON – An apostolic visitation team concluded that U.S. Catholic seminaries and houses of priestly formation are generally healthy, but recommended a stronger focus on moral theology, increased oversight of seminarians and greater involvement of diocesan bishops in the formation process.

“This visitation has demonstrated that, since the 1990s, a greater sense of stability now prevails in the U.S. seminaries,” the report said. “The appointment, over time, of rectors who are wise and faithful to the church has meant a gradual improvement, at least in the diocesan seminaries.”

The report, sparked by the sexual abuse crisis that hit the U.S. church, concluded that seminaries appeared to have made improvements in the area of seminarian morality, most notably with regard to homosexual behavior.

“Of course, here and there some case or other of immorality – again, usually homosexual behavior – continues to show up,” the report said. “However, in the main, the superiors now deal with these issues promptly and appropriately.”

The report was dated Dec. 15 and signed by Cardinal Zenon Grocholewski, head of the Congregation for Catholic Education, which deals with seminaries. It was published on the Web site of the U.S. Conference of Catholic Bishops to coincide with National Vocation Awareness Week, which began Jan. 12.

The report said some seminaries need to examine how educators can ensure the good behavior of their students when they are off-campus as well as their access to emerging technology.

“Seminaries face extra challenges today, as compared to recent years,” the report said. “Among these is how to monitor the students’ use of the Internet.” It recommended that seminaries and religious houses of priestly formation use Internet-filtering programs and restrict Internet use to public rooms within the seminary.

Bishops sometimes delegate too much responsibility for the acceptance of diocesan candidates to their vocation directors and other subordinates, the report said.

“This is unfortunate, as it is the bishop who will ultimately have to call, or not call, the candidate to orders,” it said, recommending a more collaborative approach to the formation process.

Cardinal Sean P. O’Malley of Boston, chairman of the U.S. bishops’ Committee on Clergy, Consecrated Life and Vocations, said in a letter to U.S. bishops that it was “gratifying to read in the report that our seminaries are generally in a healthy condition that strongly promotes the formation of men for the sacred ministry in this country.”

“The general conclusions of the visitation are positive,” Cardinal O’Malley added. “I am sure that all bishops and religious superiors will take seriously the observations and recommendations of the congregation that will further strengthen our seminaries and houses of formation.”

The plan to hold apostolic visitations to assess the quality of formation in seminaries arose in Rome at an April 2002 special meeting of the U.S. cardinals and U.S. bishops’ officials with top Vatican officials.

Archbishop Edwin F. O’Brien, now head of the Baltimore Archdiocese, was chosen to coordinate the visitation team, which included 117 bishops and seminary personnel. Archbishop O’Brien was rector of the Pontifical North American College, the U.S. seminary in Rome, from 1990 to 1994. For five years before that and two years after, he headed the New York archdiocesan seminary, St. Joseph’s in Yonkers, N.Y.

Working in teams of three for smaller programs or four for the larger ones, the panels visited more than 200 U.S. seminaries and formation houses in 2005 and 2006. The visitations paid special attention to areas such as the quality of the seminarians’ human and spiritual formation for living chastely and of their intellectual formation for faithfulness to church teachings, especially in the area of moral theology.

The apostolic visitation report is available in its entirety online at www.usccb.org/cclv/final_report.pdf.