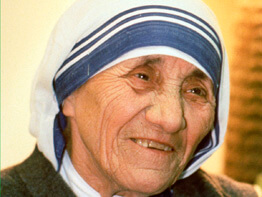 “This is a figure who had moments of uncertainty and discouragement, experiencing the classic dark night that God gives to chosen people in order to forge them on the road to holiness,” said Spanish Cardinal Julian Herranz, a member of the Congregation for Saints’ Causes.

“These moments of crisis felt by great saints are normal and in line with the church’s tradition,” Cardinal Herranz said Aug. 26. Even Christ experienced a similar spiritual trial in the Garden of Gethsemane and on the cross, he said.

Such moments of “weakness” are in fact “the proof of the greatness of faith of Blessed Mother Teresa and take nothing away from her holiness,” he said.

Cardinal Herranz, who spoke in an interview with the Rome newspaper La Repubblica, said the progress of Mother Teresa’s sainthood cause would not be affected by the letters published in the book.

Vatican and other church officials were already familiar with the letters because many were first published in 2002, and in fact formed part of the documentation reviewed before she was beatified in 2003, six years after her death.

The letters are being published in English in the upcoming book, “Mother Teresa: Come Be My Light,” edited by Father Brian Kolodiejchuk, a member of the Missionaries of Charity order founded by Mother Teresa and the postulator of her sainthood cause.

Time magazine recently ran a cover story about the book under the title, “The Secret Life of Mother Teresa.” In letters written over several decades, she spoke of a lack of faith, a “terrible darkness within me” and a sense of being abandoned by Jesus.

Sister Nirmala Joshi, head of the Missionaries of Charity, said the letters reveal that sainthood does not come easily, but they do not show a failure of faith.

“Mother (Teresa) did not doubt God, she continued to love him. If you doubt someone, sooner or later you stop following him. But she continued right up to her death to love him and to put into practice her devotion,” Sister Nirmala told La Repubblica.

Capuchin Father Raniero Cantalamessa, the preacher of the papal household, told Vatican Radio that what distinguished Mother Teresa’s “dark night” was that it apparently continued throughout her life and was not a preparation for a new spiritual stage as with other saints.

He said her inner suffering should not be seen as a denial of God, however. She knew God was there, but suffered because she could not feel him, he said.

Noting that Mother Teresa would kneel before the Eucharist for hours at a time, Father Cantalamessa said it must have been a form of “martyrdom” not to feel Christ’s presence.

“For me, this makes the figure of Mother Teresa much bigger, not smaller,” he said.
Italian Cardinal Angelo Scola of Venice, who wrote a reflection on Mother Teresa’s letters last year in the Vatican newspaper, said they reveal some important and beautiful things.

“The first is that Mother Teresa is one of us, that she went through all the trials just as we do, no more and no less,” he said.

Another important element in her letters is that Mother Teresa, when she no longer felt she could feel God’s presence, asked him to reveal himself, he said.

Joaquin Navarro-Valls, the former Vatican spokesman, said Mother Teresa’s letters showed that she experienced real spiritual suffering. That is not surprising, he said, since she was notoriously “immune” to the banal and the superficial.

“But all this is not the expression of a lack of faith, but rather of the normal – perhaps in this case heroic – sacrifice that people discover when they try to live a commitment and a choice coherently and completely,” he said.

Navarro-Valls said it would be wrong to conclude on the basis of these letters that Mother Teresa’s trademark smile was fake or that her public persona was hypocritical.

Instead, the letters illustrate that spiritual progress often must overcome obstacles that seem impassable, he said.