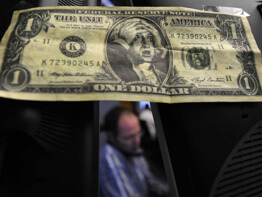 VATICAN CITY – Although many nations may be tempted to cut development aid in the midst of the international financial crisis, the crisis itself shows that an economic system focused only on making money for financial investors is bound to fail, said Cardinal Renato Martino.

The cardinal, president of the Pontifical Council for Justice and Peace, invited a dozen economics and development experts to the Vatican Oct. 23 to discuss how the financial crisis will affect development.

The discussion was led by Oscar de Rojas, director of the Financing for Development Office in the U.N. Department of Economic and Social Affairs.

In particular, he said, the Vatican wanted to speak to experts before the Nov. 29-Dec. 2 Doha Review Conference. The U.N.-sponsored gathering in Qatar will assess progress in getting nations to maintain the promises they made in Monterrey, Mexico, in 2002 to finance development projects in the Third World.

Cardinal Martino told Vatican Radio: “The logic of the market up to now has been that of maximum earnings, of making investments to obtain the greatest possible profit. And this, according to the social teaching of the church, is immoral” because the market “must benefit not only those who provide capital, but also those who participate in growing this capital by working.”

Too many families spend all of their energy on simple survival and, despite working, have become poorer while financiers have become richer, he said. Too many people in the world are forced to emigrate and too many lack the basic necessities of life such as clean water and food.

The financial collapse of the past few weeks demonstrates how the world really is one and how all people’s fortunes or disasters affect everyone else’s, he said.

Despite an initial temptation to take care of one’s own nation first, he said, the crisis proves that people must engage in “a common journey to increase the well-being of all peoples.”

L’Osservatore Romano, the Vatican newspaper, said participants at the meeting were hopeful about the Nov. 15 meeting U.S. President George W. Bush has called to bring together the world’s wealthiest nations and some of the fastest-developing countries to discuss what led to the financial crisis and what can be done to reform the global economy.

L’Osservatore also said the participants noted that the United States “is one of the countries that has had the most difficulty keeping its word” on the pledges made in Monterrey six years ago.