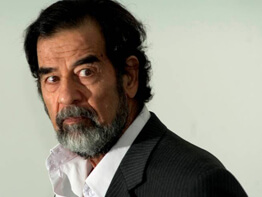 VATICAN CITY (CNS) — Repeating a remark he often has made since former Iraqi President Saddam Hussein was captured in 2003, Cardinal Renato Martino expressed hope that the deposed dictator would not be executed.

“There is no doubt” that Saddam was a ruthless dictator responsible for hundreds of deaths, said Cardinal Martino, president of the Pontifical Council for Justice and Peace.

“But one does not compensate for one crime with another crime,” the cardinal told Italy’s La Repubblica newspaper Dec. 28.

The high court ruled that the death sentence issued against him should be carried out within 30 days, but it appeared likely that the former dictator would be hanged before Jan. 1.

Asked if he hoped for an act of clemency for Saddam, Cardinal Martino told La Repubblica, “I hope in something that would avoid leading to the suppression (of a life) at the hand of the state.”

“The church proclaims that human life is to be protected from conception to natural death,” the cardinal said. “The death penalty is not a natural death.”

Cardinal Martino said it was not morally licit for anyone, “not even the state,” to kill another person.

Mario Marazziti, spokesman for the Rome-based Sant’Egidio Community and head of its campaign against the death penalty, told Vatican Radio Dec. 28 that it would be possible to protect society from Saddam and to punish him without killing him.

“This execution, like all executions, adds a death to the deaths that already have occurred,” he said. “It does not repay the victims, but simply has the feel of vengeance and, in this case, of the vengeance of the victors.”

Marazziti also expressed concern that the execution of Saddam would worsen internal tensions in Iraqi society.

“The war has not been won, but today has become a civil war to all effects,” he said.

Putting Saddam to death, he said, could “cut the legs out from under that already weak possibility of a process of national reconciliation.”