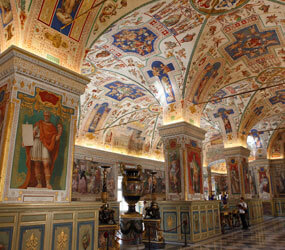 VATICAN CITY – Even though the Vatican Library is opening its doors after a three-year major renovation, most of the general public will never get a chance to walk down the frescoed halls of the pope’s library.

Only qualified students, scholars and historians are granted permission to leaf through the precious volumes or flip through the microfilm reproductions. An average of 20,000 people from all over the world visit the library’s stacks each year.

But now, to help celebrate its extensive restoration, the Vatican Library is organizing a special exhibit next to St. Peter’s Square to help everyday visitors to Rome get a look and feel for the real library.

Visitors to the exhibit in the Braccio Carlo Magno hall from Nov. 10 to Jan. 31, 2011, will be able to slip on white gloves and cozy up to exact replicas of medieval and Renaissance era manuscripts, said the curator of the library’s printed collections.

Barbara Jatta, a recent papal appointee, told Catholic News Service that the library’s artisans will also be on hand at the temporary exhibit to show the public how they care for and repair damaged bindings, worn pages and delicate codices.

Jatta was one of a number of Vatican Library officials who attended a news conference Sept. 13 unveiling the newly renovated rooms.

“We want to offer the general public (an opportunity) to learn about the Vatican Library, its history and how it began,” as well as how it has integrated the latest technology in handling and caring for its treasures, she said.

While the exhibit is still in the planning stages, Jatta said they will try to recreate the ornately frescoed Sistine Hall reading room and furnish it with chairs, large wooden desks and special table-top manuscript lecterns so visitors “can consult reproduced codices with white gloves” just like real scholars use to keep dirt and grime from soiling the folios, she said.

“We want to create a replica of this reading room because a normal visitor would never be able to see it,” she said.

Created by Pope Nicholas V in the 15th century, the Vatican Library is home to about 75,000 manuscripts and more than 1.1 million printed books covering everything from mathematics to law, theology and literature. Some 8,500 incunabula and numerous coins and medallions are also part of its collection.

The library will officially open Sept. 20 to accredited scholars.