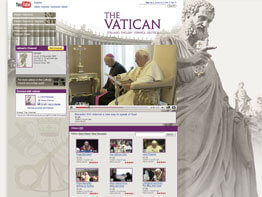 VATICAN CITY – The Vatican launched a video channel on YouTube that will feature news coverage of Pope Benedict XVI and major Vatican events.

It marked the start of the Vatican’s strategic vision of working “to be present wherever people are,” said Archbishop Claudio Celli, head of the Pontifical Council for Social Communications.

The Vatican officially unveiled the new channel Jan. 23 during a press conference that presented Pope Benedict’s message for World Communications Day, which was dedicated to new media technology.

The Vatican channel is the result of a new partnership the Vatican Television Center and Vatican Radio forged with the Internet giant Google and its video-sharing Web site, YouTube.

The Vatican’s television and radio operations had been collaborating for the past year and a half to produce short news videos that are aired on the Vatican Radio Web site.

Jesuit Father Federico Lombardi, head of the Vatican’s television and radio offices, said it only seemed natural to start offering the news clips “not only to a prevalently Catholic audience, but to a much larger, practically global audience.”

He said it was important to offer these services to people who are looking for the pronouncements and position of “a high-level moral authority like the pope and, in general, the Catholic Church” concerning the major burning issues and problems in the world today.

“Therefore, choosing YouTube as an appropriate platform for establishing a presence on the Web” made sense, he said, especially given that so much information on the pope and the Vatican was already appearing in fragmented, out-of-context forms and scattered over multiple venues.

By creating its own channel on YouTube – which boasts 70 million viewers a month – the Vatican is seeking to give people the opportunity to access information about the pope and the Vatican from a regular and trustworthy source, said Father Lombardi.

He said Pope Benedict “was personally informed about the project and sees it as a positive step” forward for the church.

The Vatican’s ad-free YouTube channel, www.youtube.com/vatican, each day will offer one to three short video news clips of the pope or major Vatican events with audio commentary in English, Italian, Spanish and German.

The footage is produced daily by the Vatican Television Center, which works with Vatican Radio to produce the audio commentary.

Viewers will be able to leave comments, distribute the videos by e-mailing or messaging the links, and share the videos with friends on various social networking sites like MySpace and Facebook, as well as submit the Vatican video links to news aggregator sites like Digg.

Unlike many videos available on YouTube, which viewers can rate according to YouTube’s one- to five-star grading system, the Vatican videos cannot be rated or embedded onto external Web sites or blogs. The Vatican channel’s home page, however, can be embedded elsewhere.

Just a few hours after its launch, the Vatican channel recorded more than 12,000 views and enrolled more than 500 free subscribers who will receive regular updates of new Vatican video uploads.

Henrique de Castro, a managing director for Google, said the company was honored the Vatican chose to use YouTube to communicate with people around the world.

He said in a written press release that YouTube was pleased its online users “will have access to the words of the pope on some of the most important issues facing the world today.”

More people search on Google for “God,” for example, than for many famous world figures and celebrities, he noted in written remarks.

Father Lombardi said the YouTube initiative was only the beginning of a long journey utilizing some of the possibilities today’s digital media and platforms offer.

He said the Vatican hopes to expand the kind of video coverage it offers to include high-definition broadcasts and events without dubbed commentary, but in the original language and with “natural sound.”