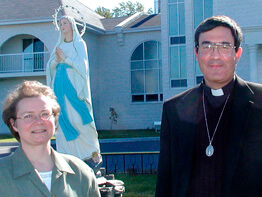 VATICAN CITY – The Vatican has announced the excommunication of certain members of the Army of Mary, a sect in Canada whose teachings have been deemed dangerous and erroneous by church authorities.
The Vatican’s Congregation for the Doctrine of the Faith, acting with the approval of Pope Benedict XVI, declared the excommunication after the Army of Mary performed ordinations without church permission, the Canadian bishops’ conference said in a statement Sept. 12.
The Army of Mary was founded in Quebec in 1971 by Marie-Paul Giguere, who said she was receiving visions from God. The organization’s publications suggested that Giguere was the reincarnation of Mary, a claim that led church leaders in 1987 to warn the faithful that the group could not be considered Catholic.
The Army of Mary defied church authorities earlier this year when it ordained several new priests. Cardinal Marc Ouellet of Quebec declared that the priest who conducted the ordination had no authority to do so, and the cardinal issued a public warning against the group.
The doctrinal congregation said it was announcing the excommunications because there was no hope of another solution to what had become a “very grave situation,” the Canadian bishops’ statement said.
The bishops’ statement said the list of those incurring excommunication included Father Jean-Pierre Mastropietro, a leading Army of Mary priest, for having attempted to perform ordinations; those claiming to have been ordained by him as deacons and priests; other members of the movement who have “entered into schism by participating in the ordinations” despite church warnings; and whoever knowingly and deliberately embraces the “heretical” teachings of the Army of Mary.
The excommunications were incurred automatically, or “latae sententiae,” the doctrinal congregation said.
In a letter issued with its declaration, the doctrinal congregation said it hoped its action would leave no doubt about the status of the Army of Mary, the bishops’ statement said.
“It is our hope that the clarification provided by this present declaration will assist those whose faith may be harmed by this schismatic group to remain faithful to the Catholic Church,” the Vatican letter said.
The Army of Mary, also known as the Community of the Lady of All Nations, has had an increasingly stormy relationship with church authorities. Although it was approved as a Catholic association in 1975, Cardinal Louis-Albert Vachon of Quebec revoked that standing in 1987, after a committee of theologians investigated the group’s writings.
In 2000, the Vatican’s top doctrinal official, Cardinal Joseph Ratzinger – now Pope Benedict – warned against the “gravely erroneous” content of the Army of Mary’s publications.
In 2001, the Canadian bishops issued a doctrinal note confirming that the teachings promoted by the Army of Mary were contrary to fundamental doctrines of the church.
It identified several specific problem areas:
– The supposed revelations received by the Army of Mary’s founder demonstrates a mistaken understanding of the purpose and function of private revelation in the church, which cannot introduce new doctrinal truths, it said.
– Some of the group’s teaching about “redemption, the Virgin Mary and reincarnation are profoundly at variance with the teaching and profession of the faith of the Catholic Church,” it said.
Specifically, it said, the group erroneously affirms that although Mary was once the historical mother of Jesus, she is now “reincarnated” and “dwells” in the very person of the recipient of these presumed private revelations.
– The group’s Marian devotion contains “many elements that are patently contrary to the teaching of the church, especially with regards to Mary’s place in God’s plan of redemption and her nonrepeatable, irreplaceable role in salvation history,” it said.
In March, Cardinal Ouellet publicly warned that those responsible for the Army of Mary had excluded themselves from the communion of the Catholic Church, that its particular teachings were false and that its activities should not be frequented or supported by Catholics.