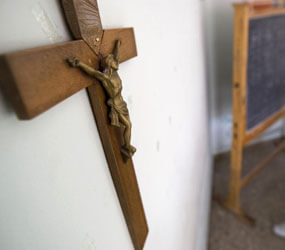 VATICAN CITY – The Vatican said it experienced “surprise and sorrow” when a European court ruled that the crucifixes hanging in Italian public schools violate religious freedom.

The European Court of Human Rights ruled Nov. 3 that the crucifixes hanging in every public classroom in Italy were “a violation of the freedom of parents to educate their children according to their own convictions and of the religious freedom of the students.”

Father Federico Lombardi, Vatican spokesman, reacted to the decision saying, “The crucifix has always been a sign of God’s offer of love and a sign of union and welcome for all humanity. It is sad that it is being considered a sign of division, exclusion or limitation of freedom. That is not what it is and that is not the common feeling of our people.”

In his statement Nov. 3, Father Lombardi said, “It also is surprising that a European court is intervening so heavily in a matter that is deeply tied to the historic, cultural and spiritual identity of the Italian people.”

The case was brought to the court by a Finnish-born Italian citizen who had been trying since 2002 to get the crucifixes removed from the school her children attended in Abano Terme, Italy.

Italy’s minister of public education, Mariastella Gelmini, announced the government would appeal the decision, saying the presence of the crucifixes “does not mean adhesion to Catholicism, but is a symbol of our tradition. The history of Italy includes symbols and removing them would be to remove a part of ourselves.”

Father Lombardi said it was particularly serious that the European court wants to remove from educational institutions “a fundamental sign of the importance of religious values in Italian history and culture.”

Religion, he said, contributes to the moral education and growth of individuals and is “an essential part of our civilization.”

Father Lombardi said it appeared that the court was trying to deny “the role of Christianity in the formation of European identity, which has been and remains essential.”

The Italian bishops’ conference issued a statement Nov. 3 saying the court was looking at the crucifix with “a partial and ideological vision” that ignored the fact that it is not only a symbol of faith, but also a symbol of one of the major influences on Italian culture.

In addition, the bishops said, the decision did not take into account the fact that as recently as 1984 the Italian government formally approved a treaty with the Vatican defining the principles of Catholic faith as “part of the historic patrimony of the Italian people.”

The ruling risks promoting “hostility to any form of religion’s political and cultural relevance” in public life, the bishops’ statement said.

Cardinal Tarcisio Bertone, Vatican secretary of state, was asked about the court decision Nov. 4 during a visit to a Rome pediatric hospital. The cardinal said, “This Europe of the third millennium has left us only the pumpkins of the recent holiday and has taken away our most precious symbols.”

“This is really a loss,” he said, adding, “we must try with all our strength to preserve the signs of our faith.”