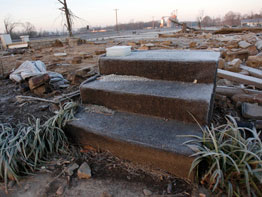 ATKINS, Ark. – Assumption Church’s annual Valentine’s roast beef dinner became an affair of the heart for victims of a February tornado that swept through Atkins, killing four people and damaging or destroying more than 100 homes and businesses.

The Feb. 9 dinner turned into a fundraiser for relief efforts and provided hot meals for victims of the Feb. 5 tornado.

“It is from the heart,” said dinner organizer Jan Cummings, who oversaw volunteers peeling more than 100 pounds of potatoes. “This year our Valentine’s dinner is coming straight from the heart.”

The dinner raised about $2,000, and it was only one of the activities that converted the church into a service center for a community in need.

The day after the tornado, Father Ernest Hardesty, Assumption pastor, opened the parish doors to provide lunch and dinner for firefighters, police officers and other relief workers.

On Feb. 11 the Federal Emergency Management Agency took over a parish hall as the official Pope County Disaster Recovery Center to register victims with FEMA and get help from state agencies and charities.

Father Hardesty told the Arkansas Catholic, newspaper of the Little Rock Diocese, that he witnessed “three miles of destruction.” His church, about half a mile from the tornado, was not damaged.

Tornado victims included parishioners William and Cindy Ehemann. They arrived home from work around 4:50 p.m. and soon learned that a tornado was heading toward them. They gathered their three cats and two dogs and hid in the master bedroom’s walk-in closet.

“William said he felt like Jesus was holding him down,” Cindy Ehemann said.

When they opened the closet door, the roof and one cat were missing.

The tornado tore the roof completely off and destroyed the workshop from which William Ehemann operates his construction business.

“I feel like we have been blessed,” Cindy Ehemann said. “We are not as much of a victim (as others were).”

Volunteers helped the couple clean up. When they were taking apart the couple’s bed, the volunteers discovered the missing cat under the bed. The cat was traumatized but not harmed.

“It has been tested,” Cindy Ehemann said of her faith. “I’m trying to get in good spirits. To me, I’m just thankful I am alive. All of this stuff can be replaced.”

Al Hettel said it takes such a tragedy to find out “that people are a lot better than you think they are.”

Hettel and his wife, Kay, also members of Assumption Church, live in one of the hardest-hit areas of Atkins. Three of their next-door neighbors died in the storm.

A neighbor encouraged them to seek shelter in another neighbor’s storm shelter.

About 24 hours after the storm, the Hettels joined other Atkins Catholics for Mass on Ash Wednesday.

“We really had something to be grateful for,” Al Hettel said.

The same tornado traveled 123 miles across the state. A second tornado took a 14-mile-path across Marion and Baxter counties. At least 13 mostly rural countries were affected.

Catholic Charities of Arkansas is overseeing the Little Rock Diocese’s recovery efforts. Volunteer parish teams will be trained to do case management.

Sister Mary Lou Stubbs, a member of the Daughters of Charity and director of Catholic Charities of Arkansas, said the teams would likely operate for at least a year.

“When the (American) Red Cross leaves, there’s still going to be many homeless families with many, many needs and really a lack of services available to provide those needs,” she said.

Much of the service provided by the parish teams involves listening to victims’ stories, she said. “People need to be able to talk out that trauma.”

Financial assistance also will be important because there are a lot of out-of-pocket expenses in the short term, she said.

“We’re such a middle-class working community; many people in these areas were living paycheck to paycheck,” she said. “There’s going to be so much financial assistance needed to get these people back in houses.”

Contributing to this story was Tara Little.