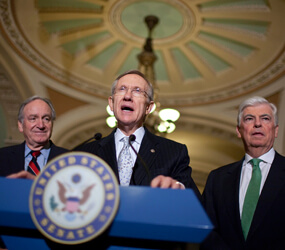 WASHINGTON – The health reform legislation now before the Senate is “an enormous disappointment, creating new and completely unacceptable federal policy that endangers human life and rights of conscience,” the chairmen of three committees of the U.S. Conference of Catholic Bishops said Nov. 20.

A letter from the three chairmen outlining the USCCB’s problems with the Senate bill’s provisions on abortion and conscience protections, coverage of immigrants and affordability for low-income Americans went out about 24 hours before the Senate voted, 60-39, to begin debate on the legislation.

The debate was expected to begin Nov. 30 after senators returned from a weeklong Thanksgiving break.

The Senate’s Patient Protection and Affordable Care Act, drawn up by Senate Majority Leader Harry Reid of Nevada from legislation approved earlier in two Senate committees, “does not meet … moral criteria” outlined by the bishops, especially on the use of federal funds to pay for abortions, the letter said.

“We believe legislation that violates this moral principle is not true health care reform and must be amended to reflect it,” said Cardinal Daniel N. DiNardo of Galveston-Houston and Bishops William F. Murphy of Rockville Centre, N.Y., and John C. Wester of Salt Lake City. “If that fails, the current legislation should be opposed.”

They head the USCCB committees on Pro-Life Activities, on Domestic Justice and Human Development, and on Migration, respectively.

In addition to their three-page letter, the three leaders sent each senator a copy of a four-page fact sheet designed to refute “a number of misunderstandings and false claims” about the House-passed Stupak amendment, which they called “a modest and reasonable measure.”

The amendment reflects “existing federal abortion funding policies in the context of health care reform,” the fact sheet says. “Under this policy, anyone who actually wants abortion coverage can buy it with their own money; the government does not use taxpayer funds for abortions; and no one who opposes abortion is forced through their health premiums to pay for other people’s abortions.”

In their letter, the committee chairmen said the Senate bill as currently written “does not live up to President (Barack) Obama’s commitment of barring the use of federal dollars for abortion and maintaining current conscience laws.”

“The bill provides federal funding for plans that cover abortion and creates an unprecedented mandatory ‘abortion surcharge’ in such plans that will require pro-life purchasers to pay directly and explicitly for other people’s abortions,” they said.

In addition, “the bill seriously weakens the current nondiscrimination policy protecting providers who decline involvement in abortions, providing stronger protection for facilities that perform and promote abortion than for those which do not,” the USCCB letter said.

The bishops also urged changes in other parts of the Senate legislation.

“We support the inclusion of all immigrants, regardless of status, in the insurance exchange … (and) the removal of the five-year ban on legal immigrants accessing federal health benefit programs,” they said.

To bar undocumented immigrants from purchasing health insurance with their own money “would harm not only immigrants and their families, but also the general public health,” the letter said. And to penalize legal immigrants would be unfair in light of the praise for them “in past immigration debates for their many contributions and for playing by the rules,” it added.

The Senate bill also would leave more than 24 million people without health insurance, the bishops said, urging the expansion of Medicaid eligibility for people living at 133 percent of the federal poverty level or less.

The bishops cited several aspects of the Senate bill that they support and urged that they be retained.

“Reforms that will strengthen families and protect low-income and vulnerable people – such as eliminating denial of coverage based on pre-existing conditions including pregnancy; eliminating lifetime caps; offering long-term disability services; and extending dependent coverage of uninsured young adults – are significant steps toward genuine health care reform,” the letter said.

The USCCB representatives said choices made in the health reform debate “are not just political, technical or economic, but also moral decisions” and that the questions they raise “are not marginal issues or special-interest concerns.”

“They are the questions at the heart of the health care debate: Whose lives and health are to be protected and whose are not? Will the federal government, for the first time in decades, require people to pay for other people’s abortions? Will immigrants be worse off as a result of health care reform?” they said. “This legislation is about life and death, who can take their children to the doctor and who cannot, who can afford decent health care coverage and who are left to fend for themselves.”