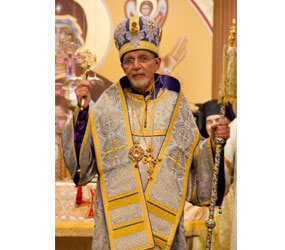 WASHINGTON – To address a shortage of priests in his nationwide eparchy, the Melkite Catholic bishop of Newton, Mass., is exploring the possibility of ordaining married men as priests.

Bishop Nicholas J. Samra of Newton notes that of the 40 parishes in his diocese, eight have no resident priest. And, while the answer is more priests, the question is how to get them.

The strategy Bishop Samra prefers is to develop priests from within the diocese rather than ask Melkite Catholic bishops from the Middle East, where the rite has its roots, to supply priests.

Bishop Samra made his views clear during an address he gave Aug. 23, the date of his installation as bishop.

“God calls men and women to religious vocations. And I believe he also calls married men to the priesthood,” he said in his remarks. “We need to study this situation in our country and develop the proper formation for men who are truly deemed worthy of this call.”

He added, “ The (diocesan) deacon formation program is a good program; however, (it) is not the back door to the priesthood. Married men who are called to priesthood need the same formation as those celibates who are called. I have already discussed this issue with those involved in priestly formation and hopefully soon we can see the growth of properly formed married clergy. Of course there are also major financial issues to be looked at and we will embark on this also.”

In a Nov. 9 telephone interview with Catholic News Service, Bishop Samra said his comments should not provoke any surprise at the Vatican.

“This is not new that I said this. I’ve said it before. They must have known this when they named me (bishop),” he said, adding he has even published his views in a book. “I know a copy went to Rome and I’m sure they saw that.

“I haven’t hidden the fact that it’s a necessity for our church,” he said, noting that any such initiative would need to be “properly managed, and not just ordaining somebody who thinks they have a vocation.”

The Vatican began placing limits on the ordination and assignment of Eastern Catholic married priests in the West in the 1880s. In 1929, the Vatican, at the request of the Latin-rite bishops of the United States, ruled that married priests could not serve the Eastern-rite churches in the United States. The ban was applied to Canada in the 1930s and to Australia in 1949.

But by the early 2000s, the Vatican had stopped suspending married men ordained to the priesthood for service in the Eastern Catholic churches of North America and Australia.

Archbishop Cyril Vasil, secretary of the Congregation for Eastern Churches, told CNS in Rome that the Vatican reconfirmed the general ban in 2008, “but in individual cases, in consultation with the national bishops’ conference, a dispensation can be given” allowing the ordination.

Eastern Catholic bishops say the Second Vatican Council’s call to respect the traditions and disciplines of the Eastern churches, and the 1990 Code of Canons of the Eastern Churches affirmation of that call, in effect nullifies the ban, or at the very least makes the ban a “disputed question” and therefore not binding.

But practical questions abound for the Melkites. “The Melkite Church never had a married clergy (tradition) in the USA,” Bishop Samra told CNS.

“We have a bunch of people who want to be ordained, yeah, but we need to have men who have the credentials,” he said, adding there are priests in the diocese who have complained, “If I had to go through all that training to get it (ordination), why shouldn’t they?” To that end, Bishop Samra said he planned on meeting with representatives of the Byzantine Catholic seminary where Melkite seminarians are educated to work out those issues.

There are some married priests serving the diocese; four are assigned to small parishes that struggle to pay the expenses incurred by the priests’ families. To address that, Bishop Samra said he would like to reinstate a dormant philanthropic arm of the diocese, and apply 30-40 percent of the funds raised as an escrow account to have the dioceses pay the costs of a priest’s family, leaving the individual parish to pay the same costs whether the priest is celibate or married.

One solution Bishop Samra said he would no longer pursue is bringing in Melkite priests from the Middle East. “Everyone we brought over we had problems with, and they’re all gone,” he said, noting they did not adapt to U.S. culture.

He added that he has told his brother Melkite bishops, “I’m a little afraid now of requesting priests from the Middle East. I’m just afraid you’re going to send us people who have problems and those problems are going to be multiplied.”

He said other approaches include having “working priests” who make a salary outside the diocese staff parishes during the weekend, and “asking a couple of our birituals to help out a little more.” Biritual priests have permission to celebrate Mass in two rites, often the Latin rite and an Eastern rite.

Melkite parishes have been closed, not for a lack of priests but for a lack of parishioners, according to Bishop Samra. He said Melkite Catholics without a priest will typically worship at a Latin-rite church, but that the longer they attach themselves to a Latin-rite parish, the harder it is to bring them back to the Melkites once a priest becomes available.

“I haven’t had people calling me up complaining they have no priest. They just don’t understand modern-day assignment procedures,” Bishop Samra said. “I’m a bishop, but that doesn’t mean I can be a dictator. … Although they sing ‘despota’ in the liturgy, I can’t be a despot.”

He added, “God provides, and that’s my faith. We’re working on it.”