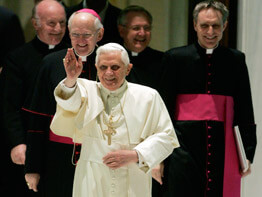 VATICAN CITY – It was a first, at least in modern times: In Rome, the center of the Catholic world and the capital of Catholic Italy, a pope felt unwelcome to give a speech at the public university.

When Pope Benedict XVI canceled his planned visit to Sapienza University Jan. 17, it marked a setback in the pontiff’s difficult dialogue with the contemporary scientific and intellectual world.

The cancellation came after more than 60 professors wrote a letter protesting the visit, saying the pope was “hostile to science.” Students planned demonstrations against the event, and the Vatican decided a no-show was the best response.

A number of factors, some of them outside the pope’s control, contributed to the controversy.

Many observers pointed to a long history of anti-clericalism in Italy, a large part of which was under papal rule until the late 19th century. This legacy has left Italians extremely sensitive to potential political interference by the Vatican.

That helps explain why a small but vocal minority argued that for a pope to inaugurate the academic year at Italy’s largest public university – even though it was founded by a pope 700 years ago – inappropriately crossed the line between church and state.

“The church is always pushing its power a little bit forward toward the Italian state,” said Piergiorgio Odifreddi, a professor of mathematics at the University of Turin.

“And the longer the institutions don’t oppose this, the further they go, erasing the boundary between secularism and religion,” he said.

But beyond the historical antagonisms in Italy, the university fiasco suggests that Pope Benedict’s message about reason and faith is missing much of its target audience. It’s a key issue in his pontificate.

The pope has explained at length why, in his view, the modern tendency to exclude God and religion is a dangerous development. He has offered carefully worded arguments to show why science and technology alone cannot furnish ethical or moral standards, and why one can speak legitimately of a divine “creative reason” at the origin of the created world.

But as the commentary flowed in the wake of the pope’s university cancellation, it became apparent that many of the protesting professors had very little knowledge of what the pope has actually said or written.

One rallying cry, that the pope was “against Galileo,” was apparently based on an erroneous page on the Italian Wikipedia, a Web site billed as an encyclopedia that anyone can contribute to or edit. The page, which has since been corrected, said that in a 1990 speech the future pope endorsed a modern philosopher’s opinion that the church’s trial of Galileo Galilei was “reasonable and just.”

In fact, the pope cited the quotation but called it “drastic.”

The professors and students might have done a little research and discovered that Pope Benedict has spoken highly of Galileo. In a talk to young people at the Vatican in 2006, he said “the great Galileo” had understood mathematics as the language of God the creator.

On a related issue, Marcello Cini, the physics professor who organized the university protest, told the newspaper Corriere della Sera that a pope shouldn’t be given an academic forum when he “tells our biological colleagues that they shouldn’t take Darwin seriously.”

That, too, seems to be an impression based perhaps on Italian newspaper headlines, rather than anything the pope has said or written. The pope, in fact, has not taken issue with evolutionary theory as an explanation of the “how” of creation, as long as it does not exclude a divine cause.

That point was made most recently in a lengthy article Jan. 16 in the Vatican newspaper, L’Osservatore Romano, by Fiorenzo Facchini, a biology professor at the University of Bologna, who wrote that there is no real opposition between evolutionary science and belief in creation.

“God is able to have created a world with the capacity to change and to evolve through natural causes,” he said.

A reasonable enough proposition, it would seem. The article went unnoticed in Italy.

The pope has laid down some serious challenges in areas like genetic manipulation, embryonic experimentation, abortion and euthanasia, all of which implicate the world of science and academic research.

But he has been careful to approach these human life questions not under the banner of “religion versus science” but as a call to conscience on the universal ethical values of natural law.

In short, the pope is calling for a “moral use of science,” as he told diplomats in early January.

Perhaps the biggest and more basic area of disagreement is whether the pope has any place speaking at a public university at all.

“He wanted to give directives to the largest state university. It’s like a physicist going to the Sistine Chapel to sing for the pope at Christmas,” said one of the Sapienza protest organizers.

This idea that the two realms should not overlap is something the pope sees as a growing danger.

“The development of modern science has increasingly confined faith and hope to a private and individual sphere, in such a way that today it is clear, sometimes dramatically clear, that man and the world need God – the real God – and otherwise remain without hope,” he said last December.

There was a short-term benefit, at least, in the decision to cancel the pope’s university appearance: Many Italian cultural and political leaders rushed to defend the pope and his right to speak his mind. The Diocese of Rome quickly organized a show of support in St. Peter’s Square.

But in the long term, the pope wants to reach the people who are not in the square.