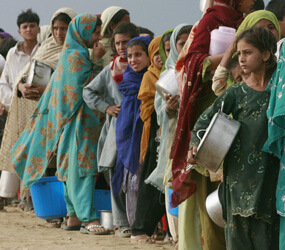 WASHINGTON – The United Nations appealed for massive financial support to serve refugees and internally displaced people, saying the ability of humanitarian agencies to help is waning.

Worldwide, 42 million people were uprooted at the end of 2008, said Antonio Guterres, U.N. High Commissioner for Refugees, during a June 16 briefing at the National Press Club. Although this is 700,000 fewer people than the previous year, he said, new displacement in 2009 because of recent crises in Pakistan and Sri Lanka has already offset the decline. Guterres called this an “illusion of stability.”

Issues such as urbanization, climate change, poverty and economic and food crises are forcing more people to move, and the international community is not prepared, Guterres said. Eighty percent of refugees are sent to developing countries, where hot climates, monsoons, lack of funding, lack of awareness and threats to safety interfere with agencies’ efforts, he added.

Such is the case in Pakistan, where 2 million people have been displaced because of violence between the Taliban militants and Pakistani forces, Guterres said.

“We have more and more peacekeeping operations in countries where there is no peace to keep,” he said.

Guterres said solutions are diminishing, and he appealed to the international community to raise awareness and to show the “same determination to rescue people as we did to rescue banks.”

“Humanitarian problems never have a humanitarian solution,” he said. “The solution is always political.”

The same day Guterres spoke, the European Union pledged millions of euros to help Pakistanis displaced in the violence in the country’s northwest. The U.S. Congress is also working on legislation to increase nonmilitary aid to Pakistan, in an effort to stabilize the nation that has nuclear capabilities.

Humanitarian issues often receive attention when first discovered, said Elizabeth Campbell, director of Refugee Council USA, a coalition of 25 nongovernmental organizations, some of which resettle refugees and some of which protect human rights. When the issues fade from the spotlight, they become more complex, and this is when help is most needed, she said.

Dick Hogan, associate director of Migration and Refugee Services at the U.S. Conference of Catholic Bishops, said federal funding levels “are not enough to meet the demands of the program at this time.”

Hogan, whose agency finds housing and employment for refugees in the United States, said there seems to be an expectation that individuals will contribute more than the federal government.

Insufficient funding is exacerbated by the economic and housing crises, Hogan said. The federal government gives $425 to each refugee settling in the United States, and some states provide public assistance. Catholic charities use private resources to bridge the gap so refugees will not be evicted, he added.

Migration and Refugee Services, one of nine nongovernmental agencies providing help to refugees in the United States, resettled 20,000-22,000 people between Oct. 1 and mid-June, and about 16,000 the previous fiscal year, Hogan said. The largest groups the agency serves are people of Bhutanese, Burmese and Iraqi descent.