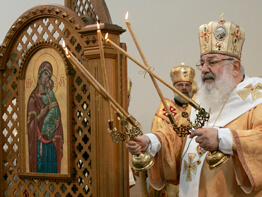 Cardinal Lubomyr Husar of Kiev-Halych, Ukraine, said the bishops discussed broad issues that were meaningful to all their members in different countries. Because of the “historical emigration” of the Ukrainian Catholic Church, it is “a global church,” he said.

Synod members had to address major topics and “limit ourselves primarily to such issues that are meaningful” to “our faithful and to our church and where that church exists,” Cardinal Husar said during a press conference at the Ukrainian Catholic National Shrine of the Holy Family in Washington Oct. 5.

Ukrainian Catholic bishops from around the world met in Philadelphia and Washington for their Sept. 26-Oct. 6 synod, the first Eastern Catholic synod to be held in the United States. Synod dates were chosen to coincide with the centennial celebration of the arrival of Bishop Stephen Ortynsky, the first Byzantine Catholic bishop in America.

In Western Europe, the Eastern church structure exists, but the church needs to pay attention to places such as Israel, Libya and South Africa, where Ukrainian Catholics are settling and where there is no church structure, he said.

Cardinal Husar said that during the synod the bishops also focused on the “education and life” of a priest, who “could carry on his duties and live his vocation no matter where he is” around the world.
He said the bishops looked at reaching out to youths and helping them to be good Christians. The bishops hope to release a major document on the topic in a couple of months, church leaders said.

Cardinal Husar explained that there are two types of youths in the Ukrainian Catholic Church: those who already actively participate in the life of the church and those who do not consider the church an answer to their questions. Reaching out to the second type of youths is a universal challenge, he said.

In Ukraine, Catholic leaders are challenged to help “young people who do not know the church, who are trying to solve on their own the problems of identity,” said Cardinal Husar.

“So few are coming into the seminaries and the monasteries … we have to try to understand and help them,” he said, adding that some might have a calling but do not know what to do without guidance.

Ukrainian Archbishop Stefan Soroka of Philadelphia said that sharing during the synod already helped the bishops garner specific information so they can “begin to act (when they return to their local churches) even before a major recommendation.”