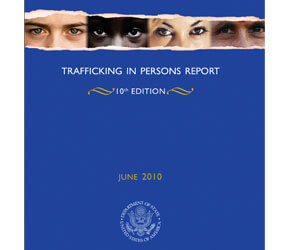 WASHINGTON – Carmen Maquilon never expected she’d be on the frontlines of fighting crime.

Her task: advocating on behalf of trafficking victims and their families in a battle to combat modern-day slavery – considered the fastest growing criminal activity in the world.

As director of immigrant services at Catholic Charities of the Diocese of Rockville Centre, N.Y., Maquilon, a native of Colombia, and her staff have worked with dozens of trafficking victims since 2003. Their first big case came in 2004 after a raid on a Long Island factory uncovered 60 Peruvians working under grueling conditions and with little hope of escaping.

“It turned into 125 because of the family members and others who came forward,” Maquilon told Catholic News Service during a break in a training program on the needs of crime victims in Washington Nov. 17.

Maquilon’s office faced the daunting task of finding housing, providing counseling and ushering the Peruvians through legal proceedings so they could remain in the United States. Fortunately, she said, her agency had a useful tool on its side: the highly regarded Trafficking Victims Protection Act of 2000.

The law gave the staff the ability to provide a wide variety of services that previously had been limited because of a lack of money.

The Rockville Centre program is one of 108 nonprofits across the United States and its territories that have been subcontracted by Migration and Refugee Services of the U.S. Conference of Catholic Bishops to provide vital services to foreign-born trafficking victims.

Funding comes through a five-year contract with the Department of Health and Human Services that runs through April. MRS had spent $8.7 million under the contract through April 2010. As of September, 2,253 victims and their families had been helped, according to “Reflections: HHS Service Mechanism for Foreign National Survivors of Human Trafficking,” a USCCB report marking the 10th anniversary of the law.

“In 10 years, we have come a very long way,” Maquilon said. “Prior to then, we didn’t have the law. Now there’s much more awareness.

“We’re not there yet. A lot of law enforcement still do not understand what is human trafficking. But even compared to five years ago, lots more is being done,” she said.

“As far as the community level, it’s raised awareness in the last 10 years,” Parampil said. “We’ve seen a shift from people not knowing what trafficking was. They had heard of slavery in the old days, but they didn’t know it was still going on.”

Parampil and her anti-trafficking colleagues consider the law a milestone piece of legislation because it gave the law enforcement community a stronger tool in its pursuit of traffickers who coerce men and women into prostitution or slave labor. Prior to 2000, outdated anti-slavery laws were all that governed trafficking activity, Parampil said.

“Human trafficking today is a lot different than what we saw 200 years ago. So the law had to adapt to the modern form of the crime,” she explained.

Bishop John C. Wester of Salt Lake City, chairman of the bishops’ Committee on Migration, credited the law for bringing greater worldwide attention to the crime of human trafficking.

“Nations around the world have taken note of U.S. leadership on this issue and have taken steps to address the problem in their own countries,” Bishop Wester said in a statement marking the law’s anniversary.

Advocates like to point out that trafficking – what they call modern-day slavery – does not just involve foreign nationals. Thousands of U.S. citizens are victims nationwide, Parampil said.

The Department of State estimated in its 2010 “Trafficking in Persons Report” that about 12.3 million people are trafficked around the world, netting trafficking syndicates $32 billion annually.

In addition to raising awareness, the law has led to new approaches by law enforcement officials in relating to victims such as the Peruvians, who previously would have been charged with being in the country illegally and subject to deportation.

Training is another component of the law, which funds efforts to span the wide expanse of workers who deal with victims – law enforcement officers, federal prosecutors, social service providers, trafficking advocates – to exchange ideas and build networks.

Detective Thomas Stack of the Montgomery County Police Dept. in Maryland, said he found such training programs helpful in understanding how to be more sensitive to the needs of distressed victims.

On the practical side, Stack said, the law allows for stiffer penalties to be imposed upon convicted traffickers because trafficking now is a recognized federal offense.

“A person (trafficker) arrested in Maryland and sent to jail is usually out in less than half his prison term. If you get sentenced to 10 years in the federal system, you’re going to do 10 years,” he said.

“It’s much easier and faster to do the state case. It’s more intensive in the federal system, but it’s worth it in the long run because you get a better result,” he said.

While passage is expected, anti-trafficking advocates still plan to lobby Congress to maintain all funding provisions, especially for training and victim services. They also would like to change several provisions to ease burdens on victims.

Bridgette Carr, director of the Human Trafficking Clinic at the University of Michigan Law School, praised the law for its victim-centered approach.

Even so, Carr is lobbying for the removal of a provision that requires victims to cooperate with law enforcement officers in their investigations. In some cases, she explained, victims are too traumatized and fear recrimination if they are compelled to talk with an officer.

For every move advocates take, traffickers make a countermove, taking better advantage of technology to entrap new victims and escape detection by law enforcement officials. For that reason, Parampil said, the task of ending human trafficking is far from over.

“It’s going to a long time before I would say society is saturated and human trafficking becomes every-day language,” she said.

“It takes a while to understand this very hidden crime.”

The U.S. bishops’ document issued on the 10th anniversary of the Trafficking Victims Protection Act of 2000 is online at www.usccb.org/mrs/reflections-letter-20101024-KP.pdf. The U.S. Department of State’s 2010 “Trafficking in Persons Report” is online at www.state.gov/documents/organization/142979.pdf.