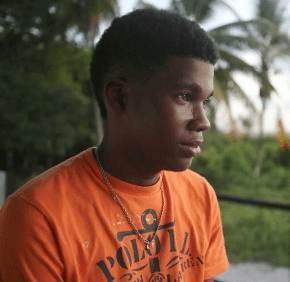 GEORGETOWN, Guyana – Patrick Daly was orphaned at age 8, and that’s when the tumor on his right cheek began to grow.

It was small at first. Daly would touch its hard surface, but he didn’t know what it was. It began to grow; the size of a small lime, then it was like a small apple was sitting just off his nose.

“The kids, they’d make fun of me. They called me ‘big nose,’“ said Daly, now a young adult. “I felt bad because it was the only thing people saw about me.”

It didn’t help that both his parents and his sister had died. He moved in with an aunt, stayed in school, took classes in agriculture and sciences, and dreamed of becoming a mechanic.

Little did he know that his life would be changed by a routine health checkup with an American Sister of Mercy at the St. Joseph Mercy Hospital in Georgetown, capital of this small South American country.

At the checkup, he met Sister Karen Schneider, a Johns Hopkins Hospital emergency room pediatrician who had been coming to Guyana since 2003.

“He had this massive growth on his face,” Sister Karen recalled. “You’d look at a profile on one side and he’d look like a normal child. Then on the other side, you’d say, ‘Oh my God.’“

The surgery to remove the tumor from Daly’s face was too complex and risky to be done in Georgetown, so Sister Karen did what she’d done for other children: She paid for him to get a passport, visa and plane ticket to travel to the U.S. and arranged for a surgery at Johns Hopkins in Baltimore and a monthlong stay to recover.

In providing health clinics each year in Guyana, Haiti, Nigeria and Kenya, Sister Karen often comes across children who cannot be treated by local doctors.

She routinely brings U.S. surgeons and specialists to donate their services to perform operations, such as repairing cleft lip and palates.

However, for a handful of more complex cases, Sister Karen has arranged for needy children to fly to the United States and receive an operation. In Daly’s case, she also clothed and fed him.

In a small way, Daly pays back Sister Karen, traveling with her each year to a remote area of Guyana’s jungle-covered interior, where he lends a hand in one of her free health clinics.