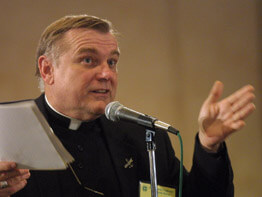 JERUSALEM – The United States has a responsibility to play a vital role in restarting Israeli-Palestinian negotiations, said the chairman of the U.S. bishops’ international policy committee.
“We have a certain responsibility. By not being engaged at this level it will certainly involve us in ways we do not want to be involved in (later),” said Bishop Thomas G. Wenski of Orlando, Fla. “There needs to be a negotiated solution.
“The status quo is not tenable,” he said. “The two partners are not on equal strength … and the USA has to prevail on Israel to negotiate in good faith and not take advantage of the Palestinian weakness.”
He said the U.S. bishops’ conference needs to encourage both sides to negotiate and to reach a workable solution in which East Jerusalem still has a role in Palestinian society. East Jerusalem was captured by Israel in the 1967 Middle East war. Palestinians say the city should be the capital of a future Palestine.
Bishop Wenski’s five-day visit, which began Aug. 29, was hosted by the U.S. bishops’ international relief and development agency, Catholic Relief Services. The bishop met with Latin Patriarch Michel Sabbah of Jerusalem; Archbishop Antonio Franco, papal nuncio to Israel and the Palestinian territories; and Israeli and Palestinian academic, legal and political activists. He also visited West Bank villages and schools.
Bishop Wenski said it is imperative to rekindle hope in the Palestinian population by starting serious negotiations toward a two-state solution to the ongoing Palestinian-Israeli conflict. He said Palestinians are experiencing a “sense of discouragement and pessimism.”
“The daily frustrations and humiliation the Palestinians have to endure because of the situation do not help create an atmosphere for a future of peace,” he said.
“A just solution to occupation that includes a secure Israel and safe Palestine would take the fuel out of (extremism) on both sides and bring hope for the future,” Bishop Wenski said.
“Part of our advocacy for the education of our people and government officials is so that the hope of the people for peace here will not be disappointed. It is incumbent on politicians to bring out the best of the Palestinian and Israeli peoples, not to appeal to the (extremists),” he said.
Obstacles such as the Israeli separation wall and the settlements that are making a two-state solution increasingly impossible need to be confronted, he added.
While acknowledging the need for Israeli security, the bishop said the separation wall – which Israel has said it needs to safeguard the lives of Israelis – is built in such away that it “does not enhance security but … expands control of territory.” The wall eventually will become a 400-mile-long barrier of concrete slabs and barbed-wire fences separating Israel from the West Bank; in some places, it physically divides Palestinian communities.
The bishop said he did not discuss the continuing bombing of southern Israeli towns by Palestinian forces in Gaza in his meetings. A rocket fired from Gaza Sept. 3 landed in an empty courtyard between a kindergarten and a school in the Israeli border town of Sderot.
Bishop Wenski said the bishops’ conference would continue to dialogue with interfaith partners in the United States and express “sincere commitment” to the future of Israel with a right to exist within defendable borders. At the same time, he said, the bishops also will promote the rights of Palestinians.