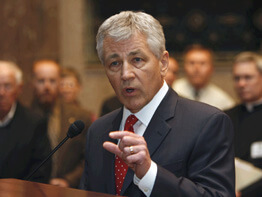 WASHINGTON – Two U.S. senators lauded the work of people in Catholic social ministry and asked for their continued support in working to improve the lot of the poor.

Sen. Casey said it was vital that the conference attendees spend time in Washington to remind those in government of their efforts “day after day, year after year” to protect “the least, the last and the lost.”

Sen. Casey, a Catholic and one-time Jesuit volunteer, quoted St. Augustine’s observation that “without justice, what are kingdoms but great robbers,” and noted that often great work is done in the halls of Congress “but too often it is a kingdom with robbers.”

He gave the example of the government’s role in the disaster of Hurricane Katrina to define what he called not just benign neglect, but “malign neglect.”

“Too many people didn’t take it seriously enough,” he said.

The damage to the Gulf Coast caused by Katrina “could have been mitigated if people in this city had done the right thing years before,” Sen. Casey said. “We should use that tragedy in a constructive way to show what our priorities should be.”

He cited current efforts to amend bills passed by both the House and Senate to raise the minimum wage to include tax cut provisions.

“Tax cuts have literally been put in front of an increase in the minimum wage,” Sen. Casey said. “We have to return to much more of a focus on the common good.”

Sen. Casey encouraged the audience in their efforts to expand the State Children’s Health Insurance Program, known as SCHIP, and suggested they keep talking about its role in helping working families as well as the poorest children.

“One way to make a program wither on the vine is to say it’s a program only for the poor,” he said. “The poor don’t have lobbyists.”

Sen. Hagel, an Episcopalian, said too often the world responds to people in poverty in ways that further devalue their human dignity, rather than helping them maintain self-respect.
“You cannot take dignity from people without some cost,” Sen. Hagel said.

Both Sen. Casey and Sen. Hagel talked about pushing to end the Iraq War and get U.S. troops home.
Sen. Hagel said the problems of Iraq “are not going to be solved at the end of a rifle. We need to do better than that.”

Sen. Casey said U.S. withdrawal from Iraq should be handled in such a way that it not only addresses the complexities of the current situation but also ensures that the lessons learned there are not lost on the U.S. government.