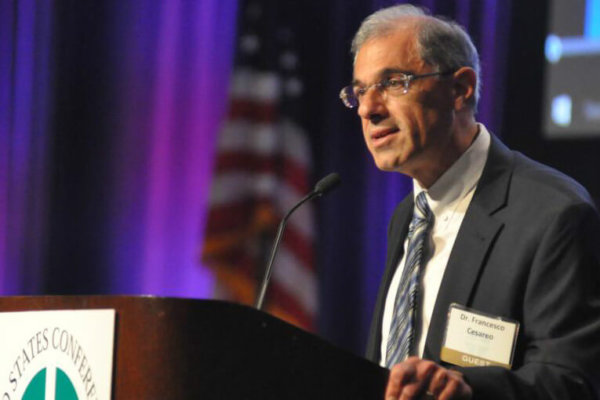 Francesco Cesareo, chairman of the National Review Board, speaks June 14 during the opening session of the U.S. Conference of Catholic Bishops' annual spring assembly in Indianapolis. (CNS photo/Sean Gallagher, The Criterion)

INDIANAPOLIS — Francesco Cesareo, chairman of the National Review Board, urged the U.S. bishops June 14 during their spring meeting in Indianapolis to continue to keep their commitment to stopping clergy sexual abuse and supporting victims of abuse “at the forefront” of their ministry.

He said sexual abuse of minors by clergy is “not a thing of past” and stressed the bishops have to always be vigilant and be sure to not “let complacency set in” in their efforts to stop it.

The review board is a group working with the U.S. Conference of Catholic Bishops to address and prevent sexual abuse of minors in the U.S. by clergy and other church personnel.

Cesareo pointed out there was still work to be done in this area, but he also praised the bishops for what they’ve accomplished and stressed that dioceses in the United States are among the safest places for children and are also models for rest of the world.

In his report to the bishops, he presented some of the key points of the recently issued 14th annual report on diocesan compliance with the U.S. Catholic Church’s “Charter for the Protection of Children and Young People.”

The report — based on audits conducted between July 1, 2015, and June 30, 2016 — shows that 1,232 survivors of child sexual abuse by clergy came forward with 1,318 clerical abuse allegations in 132 Catholic dioceses and eparchies. The allegations represent reports of abuse that occurred from the 1940s to the present.

The review board chair said he was pleased with the high number of dioceses participating in the audit, noting that only two did not participate, down from six the previous year. He said all dioceses have indicated that they will participate in the next audit.

The value of participating in the audit “can’t be overemphasized,” he said.

One weak spot he noted in the audit process is the overall lack of parish participation, which he urged bishops to do something about to provide full transparency.

Cesareo, president of Assumption College in Worcester, Massachusetts, stressed that the review board wants to help the Catholic Church by providing tools to implement the charter and even to work on improving the charter by making it more specific.

Cardinal Daniel N. DiNardo of Galveston-Houston, president of the U.S. Conference of Catholic Bishops, has appointed four new members to serve on the review board. The new members, announced June 14, are: Amanda Callanan, director of communications for the Claremont Institute, a California-based think tank; Suzanne Healy, victims assistance coordinator for the Archdiocese of Los Angeles from 2007-2016; Dr. Christopher McManus, who practices internal medicine and is an active member of the Northern Virginia Guild of the Catholic Medical Association; and Eileen Puglisi, former director of the Office for the Protection of Children and Young People in the Diocese of Rockville Centre, New York.

Cesareo will continue to chair the review board until his term expires in 2020.

Prior to his presentation to the bishops, Margaret Simonson, chair of the U.S. bishops’ National Advisory Council, a group of laypeople who advise the bishops, gave her report.

She said the council supported several items on the bishops’ agenda for their June 14-15 meeting, particularly discussion about religious liberty, which she said was so important in “this particular time in history.”

She also said the council supported the “Mass of Prayer and Penance” being celebrated in the early evening June 14 for survivors of sexual abuse within the church, the discussion of revised guidelines for people with disabilities and an update on the upcoming convocation for Catholic leaders taking place in Orlando, Florida, July1-4.

Simonson, chancellor of the Diocese of Rapid City, South Dakota, also suggested the USCCB take up the following action items:

She said the council was “blessed to serve the bishops” in the work they do.