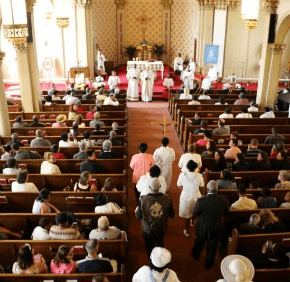 By George P. Matysek Jr.
gmatysek@CatholicReview.org
Twitter: @ReviewMatysek
As voices from an African-American choir filled St. Peter Claver Church with the buoyant strains of a Gospel hymn and more than 250 bishops from across the country filed into the pews of the West Baltimore church Nov. 14, Michael A. Smith called what he was witnessing “historic.”
For the first time since the U.S. bishops began holding their annual fall meeting in Baltimore a decade ago, the church leaders gathered to celebrate Mass not at the Basilica of the National Shrine of the Assumption of the Blessed Virgin Mary, but at an inner-city faith community.
“It’s kind of monumental,” said Smith, a St. Peter usher, pausing from guiding visitors to their seats. He acknowledged that the presence of the bishops is a “sign of hope.”
“Our church needs new energy,” Smith said. “I’ll be 55 in February and I have a 19-year-old here. We need new blood. This might attract new people to the church.”
St. Peter Claver, founded in 1888 and also home to St. Pius V Parish, is located near the epicenter of the riots that rocked Baltimore following the death of Freddie Gray Jr. from injuries sustained while in police custody last year. The bishops chose the church for the site of their Mass as a sign of solidarity and support for areas affected by violence.

In welcoming his brother bishops, Baltimore Archbishop William E. Lori said St. Peter Claver is a “perfect example of the church’s unique role and importance in communities like this around our country.”
The archbishop noted that the day after the riots, he witnessed Josephite Father Ray Bomberger, St. Peter’s pastor, join other parishioners in cleaning up the neighborhood. They helped “reclaim their community while setting a peaceful and loving example for those around them and for the whole community,” Archbishop Lori said.
The parish was also a center of prayer for healing of the community.
“This parish is that field hospital envisioned by Pope Francis where the Lord’s mercy is shared day in and day out alongside people struggling in many, many ways,” said Archbishop Lori, who was joined at the Mass by his predecessor, Cardinal Edwin F. O’Brien.
A combined choir made up of choristers from St. Peter Claver, St. Pius V and New All Saints in Liberty Heights sang several poignant hymns such as “In the Beauty of Holiness,” inspiring some in the congregation to clap along.

The bishops, who are meeting at the Marriott Waterfront Hotel Nov. 14-16 for their annual Fall General Assembly, arrived at the church on several buses. In entering the church, they could see abandoned, boarded-up and graffiti-tagged row houses.
Prior to the start of the Mass, several bishops took photos inside the church and shared them on social media. Among those who Tweeted images included Bishop Earl Boyea of Lansing, Mich., and Bishop Gregory L. Parkes of Pensacola-Tallahassee, Fla.
In his homily, Archbishop Joseph E. Kurtz of Louisville, Ky., outgoing president of the U.S. Conference of Catholic Bishops, said announcing the Good News of Christ and healing racial divides involves more than “simply a quick visit on a bus.”
It must be accompanied by dialogue rooted in Gospel truth that fosters responsible action, he said.
“We need to head into the deep and announce the Good News if we are to reverse the rising violence and the falling civility that plagues our nation,” he said.

Archbishop Joseph E. Kurtz, president of the United States Conference of Catholic Bishops, receives the offertory gifts during Mass at St. Peter Claver Catholic Church in West Baltimore Nov. 14. (Kevin J. Parks/CR Staff)
The archbishop held up the example of St. Peter Claver, a Spanish Jesuit missionary who ministered to slaves in South America in the 17th century. The saint looked at each person he encountered with the eyes of Christ, the archbishop said.
“Peter Claver did not come with the feet of a distant observer,” Archbishop Kurtz said, “but as one who had heard the voice of Jesus – as one with a heart moved to engagement.”
Archbishop Kurtz’s homily was briefly interrupted by a man who stood in the sanctuary and unfurled a sign asserting that the bishops must stop “persecuting gays.” He was escorted from the church.
Baltimore Auxiliary Bishop Denis J. Madden said the mere presence of the bishops at St. Peter Claver brought “much joy” to the people in the parish and the wider community.

Bishop Gregory John Mansour of the Eparchy of St. Maron of Brooklyn, N.Y., thanks a parishioner at St. Peter Claver Church following Mass at the West Baltimore parish Nov. 14. (Kevin J. Parks | CR Staff)
“It’s a wonderful idea,” Bishop Madden said, noting that Atlanta Archbishop Wilton Gregory suggested having the Mass at St. Peter. “I’m so glad the bishops and the cardinals have the opportunity to see this parish.”
Longtime parishioner Iris Turner told Catholic News Service that seeing the nation’s bishops in the church where her great-grandparents worshipped and where she has been firmly rooted since receiving her first sacraments was an experience that “filled my soul.”
Turner, who attended the now-closed parish school from first grade through eighth grade, as did a friend she sat by at the Mass, said she hoped the bishops’ visit “would put St. Peter Claver on the map.”