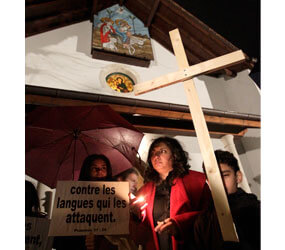 New York Archbishop Timothy M. Dolan, president of the U.S. Conference of Catholic Bishops, expressed “profound sorrow” over the deaths of about two dozen in a Coptic Orthodox church in Alexandria, Egypt, in a Jan. 4 letter to Coptic Orthodox Pope Shenouda III.

He also said American Catholic bishops “stand in solidarity with you and your church in this time of trial and suffering.”

In a separate letter Jan. 6 to Secretary of State Hillary Rodham Clinton, Bishop Howard J. Hubbard of Albany, N.Y., chairman of the bishops’ Committee on International Justice and Peace, said the recent spate of attacks on Christians in several countries deserves a response from U.S. diplomats.

“We believe the egregious violations of human rights as well as indifference and inaction by foreign governments to the protection of their own citizens must be weighed seriously by the current administration as it makes economic and political decisions that impact these states,” Bishop Hubbard wrote.

He called upon U.S. diplomats to “raise with other governments the need to better protect the human rights, including religious freedom, for vulnerable minorities, especially Christians.”

In addition to the bombing at the Orthodox church, Bishop Hubbard cited the Oct. 31 bombing of a Syrian Catholic church in Baghdad that claimed more than 60 lives and several church bombings in Nigeria that have resulted in more than 80 deaths as reasons for rising concern among U.S. bishops.

Archbishop Dolan called the assault on the Egyptian church, which also injured more than 100 Coptic Christians, “a shocking assault on human life and religious freedom.”

“So many innocent lives lost to such senseless violence calls for the strongest condemnation by all religious leaders and by persons of conscience everywhere,” he said.

The archbishop pledged to offer prayers for the Coptic Orthodox Church as well as the victims and relatives.

The USCCB will continue to work, he added, “to defend the life, dignity and human rights, especially religious freedom, of vulnerable minorities, especially Christians, in the Middle East.”