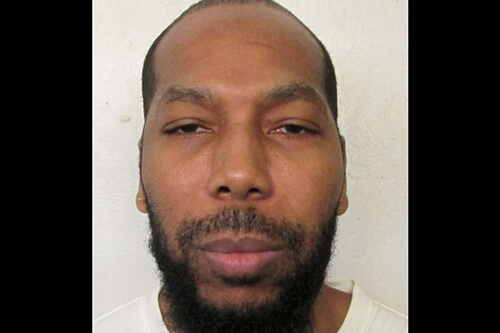 Death-row inmate Domineque Ray, 42, was executed Feb. 7, 2019, by lethal injection at the Alabama state prison in Atmore. The U.S. bishops said they were troubled by his execution but also by the U.S. Supreme Court denying the Muslim man's request to have his imam at his execution. Ray was sentenced to death for the 1995 rape and murder of a 15-year-old girl. (CNS photo/Alabama Department of Corrections handout via Reuters)

WASHINGTON — The Supreme Court’s refusal to allow an imam to be present at a Muslim man’s execution Feb. 7 was “unjust treatment” that is “disturbing to people of all faiths,” said two U.S bishops.

“People deserve to be accompanied in death by someone who shares their faith. It is especially important that we respect this right for religious minorities,” said Archbishop Joseph E. Kurtz of Louisville, Kentucky, and Bishop Frank J. Dewane of Venice, Florida, in a Feb. 8 statement. They are the chairmen, respectively, of the U.S. Conference of Catholic Bishops’ Committee for Religious Liberty and the USCCB’s Committee on Domestic Justice and Human Development.

In a 5-4 vote Feb. 7, the Supreme Court allowed the execution of Alabama death-row inmate Domineque Ray to proceed without an imam present as Ray had requested.

He had been told that only prison employees, which included a Christian chaplain, could be at his execution for safety reasons. Just days before the Supreme Court weighed in, a panel of the U.S. Court of Appeals for the 11th Circuit had stopped the execution and ordered an expedited briefing in the case.

The Supreme Court’s decision on the emergency stay was not a typical ruling following oral arguments so the court did not have to explain its decision. It only said the inmate had waited too long to object to the prison’s decision.

Kagan said that Ray “has put forward a powerful claim that his religious rights will be violated at the moment the state puts him to death.”

She also wrote that his treatment “goes against the Establishment Clause’s core principle of denominational neutrality.”

That argument was similarly cited by the lower appeals court panel which said Ray had presented “a powerful Establishment Clause claim.”

“We are exceedingly loath to substitute our judgment on prison procedures for the determination of those officials charged with the formidable task of running a prison, let alone administering the death penalty in a controlled and secured manner,” Judge Stanley Marcus wrote. “Nevertheless, in the face of this limited record, it looks substantially likely to us that Alabama has run afoul of the Establishment Clause of the First Amendment.”

The U.S. bishops, in their statement, said Ray’s execution troubled them because “the death penalty itself is an affront to human dignity and the church has long called for its abolition in the United States and around the world.”

They added that Ray “bore the further indignity of being refused spiritual care in his last moments of life, in violation of the First Amendment to the U.S. Constitution and Alabama law.”

The bishops’ statement quoted Pope Francis’ remarks during his recent visit to the United Arab Emirates where he said: “What we are called to do as believers is to commit ourselves to the equal dignity of all.”

“Let us make this commitment today,” the bishops said.

Ray, who was on death row for the 1995 rape and murder of a 15-year-old, was allowed to meet with an imam before his execution and the religious leader watched from an adjoining room as Ray was executed by lethal injection an hour after the Supreme Court’s decision Feb. 7.