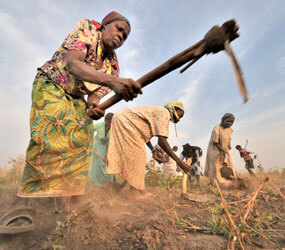 WASHINGTON – Less than four months remain until voters in Southern Sudan are scheduled to decide whether to form their own country, yet little work seems to have been completed in preparation for the vote, said a U.S. bishop.

Bishop Howard J. Hubbard of Albany, N.Y., chairman of the U.S. bishops’ Committee on International Justice and Peace, said he learned during a recent six-day visit to Sudan that the work of the commission overseeing the Jan. 9 referendum “has barely begun.”

“The demarcation of the border is not complete. Voter eligibility has not been determined and no voter registration has begun. There’s no awareness among the people as to what has taken place,” Bishop Hubbard told Catholic News Service Sept. 9, five days after returning from his first trip to Africa, which also took him to Nigeria. Bishop Hubbard was the guest of the Sudanese bishops’ conference and visited sites in Khartoum, the capital, and Juba in the South.

“From a Western perspective, it’s hard to believe that we’re almost five years into the (peace) process and those fundamental issues have not been resolved,” the bishop said.

The referendum is just one of a series of steps outlined in the 2005 Comprehensive Peace Agreement that ended decades of civil war in Sudan.

The planned vote will determine if the largely Christian and animist South, with its significant oil deposits, will secede from the predominantly Islamic North. Observers consider the referendum a step that could significantly shape alter the region’s future.

Bishop Hubbard’s observations echoed those of Sudanese bishops who, in a July 23 statement, raised numerous concerns about the lack of progress being made toward the referendum.

In their statement, the bishops called upon officials in to ensure that the referendum – and a separate one for Abyei – take place “on time, in a free and fair manner, and that the outcomes are recognized and respected.”

Bishop Hubbard attributed the delays to long-standing mistrust among the parties from the North and South. Politics also is playing a role, he said.

The bishop also said some talk has surfaced that the vote may be postponed a month or two as long as the parties can show progress toward firming up referendum details.

“But that’s not something anybody’s taken a definitive stand on,” he said.

Not only must election issues be resolved, but major questions still remain concerning the rights of the 1.5 million people displaced from Southern Sudan who live in the North. Bishop Hubbard said little has been resolved regarding their fate.

“If there’s secession, what happens to those Southern people in the North?” he asked. “If they return, is there capacity by the government to provide for basic needs – food, shelter, education? Is there infrastructure to support them?”

Concerns abound over the religious and human rights of Christians who remain in the North, Bishop Hubbard explained.

Debate remains over sharing oil revenues between the two governments if secession occurs and access to water from the Nile River, which flows through the region.

While Africa Union and U.N. peacekeeping troops patrol the region, some question remains over their ability to maintain peace if violence arises because factions on both sides are not pleased with the referendum’s results, Bishop Hubbard told CNS.

To head off the possibility of violence, the Catholic Church has planned a series of events designed to keep the peace. Beginning Sept. 21, the U.N. International Day of Peace, and running until Jan. 1, the church’s traditional World Day of Peace, prayer vigils, special prayers at Mass, peace-building activities and discussions are being planned to promote peace and reconciliation, Bishop Hubbard said.